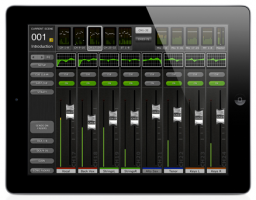 Yamaha has announced that versions 3.0 of the StageMix iPad apps for M7CL and LS9 will be available in April, 2012.

Since Yamaha introduced the first digital mixing console, the DMP7 in 1987, the company has continuously been in the forefront of developing high-performance products in response to user needs and feedback.

In 2010, Yamaha released the original M7CL StageMix iPad app, which allows engineers to quickly adjust monitor mixes from the performers' positions onstage or in the audience. The next year, 2011, saw the release of the LS9 StageMix, for use with the LS9 console.

The Stage Mix iPad apps for the M7CL and LS9 provide greater control flexibility for those digital mixing consoles. They conveniently allow the sound engineer to freely adjust the parameters of the M7CL or LS9 by wireless control, rather than having to be in the mixing booth to fix the sound. This portable control via the iPad lets the engineer go to various listening locations - performer's positions onstage and audience seats - and immediately hear the effects of the adjustments.

One of the most crucial elements in getting optimum sound for live performance is to make sure the performers get the sound they want and need to hear, with optimum balance. The simple, intuitive graphical interface of the iPad with wireless control results in better mixes done in much less time - making operation of the M7CL or LS9 even more efficient and convenient.

Now, in the 25th year anniversary since the introduction of the digital mixer, M7CL StageMix and LS9 StageMix have taken the leap to Version 3 - giving users even greater control, functionality and convenience in live sound setups.

"I am proud to announce that the M7CL StageMix / LS9 StageMix apps, which have received many favorable reviews since their market release, have now been upgraded to a new version," says Kazunori Kobayashi, General Manager of Yamaha Pro Audio Division. "The combination of StageMix and the M7CL / LS9 provides users with more convenient, more comprehensive live sound setting control than ever before. We will continue to listen and respond to comments from the market in order to provide customers with the best performance."

The new StageMix Version 3 boasts a variety of new versatile functions that give you more comprehensive, wireless control over live sound settings. StageMix Version 3 for the M7CL or LS9 can be downloaded from the App Store from April*.