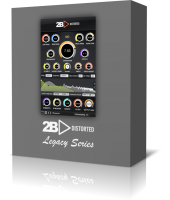 2B Distorted is an extreme powerful distortion/clipping plug-in made by 2B Played Music. We created the plug-in specially for producers who are concerned with producing the harder styles of dance music.

Still, this distortion / clipping plug-in is also ideal for creating distorted effect sounds or that edgier sound on vocals, synths and string instruments such as guitars in the pop / rock genre. It is up to your creativity.

When creating the factory presets we focused on creating great starting points for Hardstyle and Rawstyle kicks. With this, the plug-in comes into its own with all its possibilities.

We were determined to take a different approach to our plug-in than what is already on the market. In addition, we really wanted to give our plug-in its own sound. Fortunately, all of that worked. We have created an advanced filter and distortion / clipping system with the most anticipated options in it as well as some unique options such as our "SYM Boost" technology. We have also expanded our plug-in with our vision of how such a plug-in should be.

That means we've done our best to reduce the number of steps it takes a producer to create an advanced distorted signal (When creating Hardstyle or Rawstyle kicks as example).

To give a good example of what's possible, we include a dry kick sample with your purchase, along with over 50 creative presets. This really gives you an inspiration boost to get to know all the possibilities of the plug-in.

Because the possibilities are almost endless, we are genuinely curious about what you can get out of it.

Products similar to 2B Distorted...

Comments & Discussion for 2B Played Music 2B Distorted