3D Triple Delay by Harrison is a Virtual Effect Audio Plugin. It functions as a LV2 Plugin. 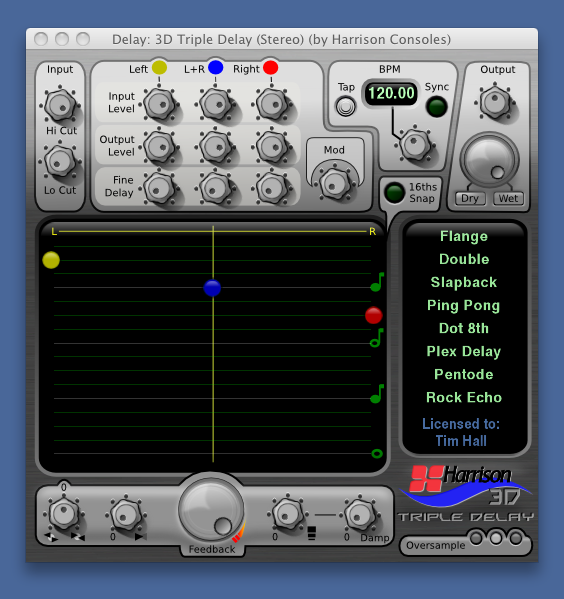 The 3D Triple Delay is Harrison's modern take on delay. To the right of the plug-in are 8 vigorously tweaked presets to get you started without much hassle. For tweakheads, the 3D Triple Delay includes 3 separate delay taps (Left, Right, and L+R) that can be panned and timed independently upon the plug-in's grid. Each delay tap includes controls for input gain, output gain, and a fine delay adjustment.

The feedback controls allow you to get even more tweaky. The first knob allows you to adjust how much the L+R delay tap feeds into the Left and Right taps, or vice versa, which is useful in creating a spacial effect. The second knob adjusts how much the left and right feed-back into each other, which is good for creating a ping-pong effect. The third knob adjusts how much each delay tap feeds into itself, creating a tape-style loop delay. A fourth knob is added to adjust how much HF roll-off occurs over time.

Version 2.3 of the plug-in added an oversampling feature, allowing the mixer to adjust the quality of the delay as needed.

3D Triple Delay is available as part of the Plug-In Essentials Pack for Mixbus.

songs you wish you had written if you are that capableby Forgotten @ 18:05 in Everything Else (Music related)Audiority releases L12X - Solid State Amplifier - FREE VST/AU/AAXby Stringzy @ 18:04 in EffectsDeXeD user guideby empphryio @ 18:03 in InstrumentsIs Cubasis3 + AUv3 + iPad Pro a viable way to make music (on the go, on the couch)?by Tks32tim @ 18:03 in Mobile Apps and HardwareHow would a subscription model benefit the consumer using Logic?by imrae @ 18:00 in Hosts & Applications (Sequencers, DAWs, Audio Editors, etc.)

What is the secret with Moog VCF?by vurt @ 17:46 in Hardware (Instruments and Effects)