BUYING! X Checkout $39.00Buy Now!
A.P.E. Micro by Soundiron is Soundware (e.g. samples or presets that load into other products). 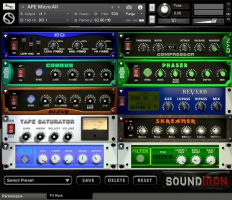 Each articulation sound set has 4 - 12 dynamic velocity layers and a simplified 2 round robin variations per note. Owner of APE Micro can apply their APE Micro purchase toward the upgrade to the much larger Apocalypse Elements library for Kontakt Player or the full 25GB Apocalypse Percussion Ensemble to have the complete package.

APE Micro has a simple and intuitive user interface with detailed sound-shaping controls, modular kit-building, dynamic arpeggiation and customizable FX routing, with over 100 natural spaces and special effect convolutions. The Kontakt presets in this library all require the full retail version of Kontakt 5.5.2 or later, or users can import any of the nearly 400 drum samples into any wav-compatible program they wish.

The library is for the full retail version of Kontakt 5.5.2 and later (OS X 10.9 or later / Windows 7 or later). The free Kontakt Player does not support this format:

My KVR - Version Control & Lists
Not In Your MY KVR Groups
(or group limitation prevents versioning)
4 people have added A.P.E. Micro to 3 My KVR groups 5 times
2 0 I Want This
2 0 Favorites
+1 in private groups

HoRNet New Chinese Year sale: plugins up to 50% off, bundles 20% off

Time+Space NAMM Special Deals - Save Up To 70%

Strix Instruments NAMM Sale - Up To 87% Off

NUGEN Audio update and offer: up to 40% off SEQ-S plug-inSee All #KVRDealsSee All KVR Marketplace Deals