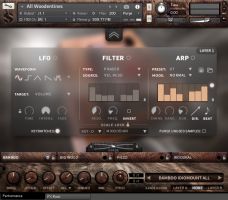 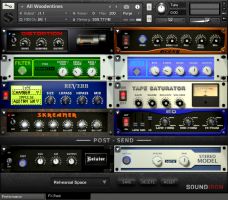 Woodentines is a nuanced and expressive selection of wooden lamellaphones by master instrument inventor Bart Hopkin. Featuring 3 unique instruments with wildly different shapes and mechanics, the same crisp and yet ponderously watery wooden essence shines warmly through each one. It includes the Bamboo Idiomount, Big Wooden Kalimba and Woodkal, plus a special bonus instrument called Piezo Tongues.

We've included a range of playable articulations and multiple microphone/channel options to give you complete freedom. And in classic Soundiron tradition, we've also included sound-designed textures, pads and tones that take the concept beyond its material source and into the realm of pure imagination. They can be played, layered, modulated and blended along with the natural acoustic articulations to achieve and endless array of new sonic combinations. This collection offers you a broad, flexible palette of musical colors and comes equipped with easy-to-use layer mixing, performance tools and special effects to spark your creativity.

Bamboo Idiomount is a round MBira-like bowl instrument with a hollow resonator cavity and two opposing rows of bamboo tines. It has a crisp, rich and raspy quality. It features 3 stereo mic positions: internal, close and room. It includes plucked notes and a percussive side slap articulation.

Big Wooden Kalimba, also known as the Wooden Idiomount, is a chromatic scale of large wooden tongues bridged over a large trapezoidal chamber. It has a lush and dreamy tone with deep bass. It features 2 stereo mic positions: close and room. It includes finger pluck and stick tap chromatic notes on the tongues, plus percussive taps, knocks and gliss effects.

The Woodkal, also known as Small Wood K, is a 3-octave scale of thin, flat wooden tongues bridged to a hollow irregular pentagonal resonance chamber. It has a tight, raspy pluck sound with a spacious openness and rich low end. It features 2 stereo mic positions: close and room. It includes finger plucks.

Piezo Tongues is an unusual electric instrument comprised of wooden blocks that clamp a rank of piezoelectric tape strips, each cut to vibrate at a specific frequency to create a chromatic scale. Each strip also acts as its own transducer. When played by plucking, they produce a dry, brisk "fwip" or "pop" in a distinct musical pitch. The instrument sounds almost like a musical pop-gun ensemble.

We've faithfully sampled tine plucks and percussive hand slaps on the instrument bodies, with two stereo mic positions. Also included is a wide selection of custom FX presets and plenty of our signature sound designed ambient content, crafted from the raw acoustic source to give you complete creative freedom.

Listen to demos of Woodentines on Soundcloud

Made for the free Kontakt Player (version 6+), Komplete Kontrol, all S-Series Keyboards and NKS software and hardware by Native Instruments.

Works with the Kontakt "Libraries" browser and Native Access.