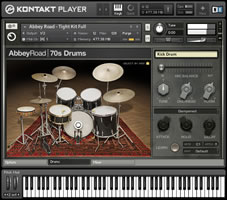 Abbey Road 70s Drummer by Native Instruments / Abbey Road is a Virtual Instrument Audio Plugin and a Standalone Application for macOS and Windows. It includes, and is therefore "powered by", Kontakt Player, which functions as a VST Plugin, an Audio Units Plugin, a VST 3 Plugin, an AAX Plugin and a Standalone Application.
The OS and Format icons below are for the latest version of Kontakt Player. The version numbers are for Abbey Road 70s Drummer.
Product
Version
1.3
Product
Version
1.3
Tags
Tags:Drum KitsAbbey RoadAbbey Road 70s DrummerDrumsLoopsNative Instruments
Instrument
Formats
Copy Protection
Online Activation (Challenge / Response)
My KVR - Groups, Versions, & More
153 KVR members have added Abbey Road 70s Drummer to 17 My KVR groups 171 times.
Not In Your MY KVR Groups
(or group limitation prevents versioning)
113 0 I Own This
29 0 Favorites
15 0 My Actual Studio
1 0 My Perfect Studio
1 0 I Want This
+12 in private groups

At the heart of Abbey Road 70s Drums are two sought-after drum kits of the Seventies, a Premier and a Ludwig, both painstakingly recorded in Abbey Road's legendary Studio Two renowned for its unique acoustic properties. While the Ludwig kit provides the typical big and roomy sound that is a hallmark of many classic rock songs of the Seventies, the Premier kit was recorded in a deadened environment within the famous studio to create a tight and punchy tone that also lends itself to R&B, disco and other contemporary genres. All samples were captured using Abbey Road's engineering expertise and arsenal of vintage equipment. Classic microphones from the studios' famed collection, the exclusive EMI TG mixing desk, an analog 2-inch tape machine and other authentic outboard gear all contribute to the "charismatic and genuine" sound of Abbey Road 70s Drums.

Up to 34 velocity layers per instrument with up to six additional variation samples guarantee ultimate authenticity both for rhythm programming and for real-time MIDI-controlled playing, with a selection of different MIDI mappings accommodating the established layouts of various popular electronic drum kits and third-party drum libraries. Separate "vintage" and "modern" microphone setups provide a choice between classic and contemporary tone, with the Ludwig kit also offering an optional "Glyn Johns" configuration, a technique used for some of the most acclaimed drum recordings of the Seventies era.

The user interface of Abbey Road 70s Drums makes full use of the advanced GUI features of Kontakt, providing convenient controls for articulation, sound shaping, mixing and routing. Advanced randomization can even add subtle nuances to the tone and timing to make it virtually indistinguishable from a conventional studio-recorded drum performance.