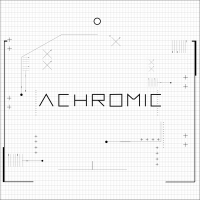 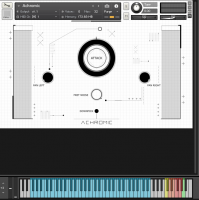 Achromic is a guitar library focussed on aggressive rhythm guitars for metal or hardcore productions.

Achromic is the answer for when you just need rhythm guitars fast and sounding great.
{See video at top of page}

PLEASE NOTE: Achromic outputs a DI signal. You will need a guitar amp plugin (or use Kontakt's in-built one).

The instrument is an Agile Septor Pro 727 seven-string guitar with Seymour Duncan Blackout pickups. Professionally setup and meticulously sampled, including individual pick-attacks and fret noises to accurately capture realistic stereo rhythm guitars (or leads, with a bit of tweaking).

The playback engine uses a non-repeating algorithm to split 2 samples either side in a round-robin fashion. This results in a realistic sound and removes the "machine-gun" effect.

In addition to regular sampling, I went in and recorded individual atonal pick attacks to layer on top of the original notes. The custom user-interface allows complete control over the volume of these additional samples for when you need aggressive picking to cut through heavy amp distortion. This same knob also controls the level of Attack applied through a Transient Shaper effect on the backend, resulting in even more pick aggression. No more weak picking.

No keyswitches. Use low-velocity for palm mutes and high velocity for sustains. Additional articulations are mapped to the coloured FX keys (like Pick Scrapes or Dead Notes). Achromic is designed from the ground-up to be as fast as possible for writing purposes.

Additional noise samples were individually recorded and have a random chance to trigger on release. The volume and decay of these sounds can be controlled with the Fret Noise Knob on the interface.

For riffs that need to slam extra hard, the Force Downpick switch mutes the up-stroke articulations. This can be automated using any DAW's inbuilt automation.

Achromic outputs a raw signal (DI), you'll need to provide your own sweet-sounding amps or simulations to really make the sound your own.