Aether by 2CAudio is a Virtual Effect Audio Plugin. It functions as a VST Plugin, an Audio Units Plugin, an RTAS Plugin and an AAX Plugin. 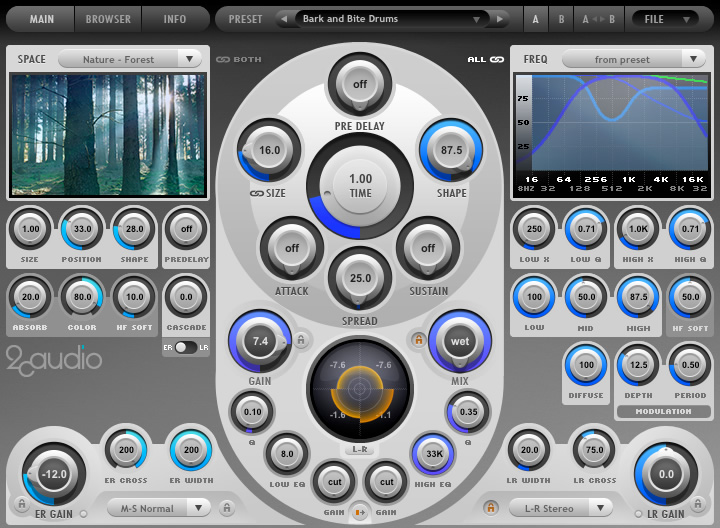 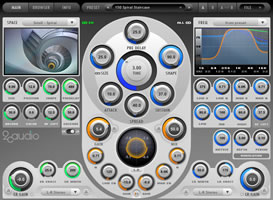 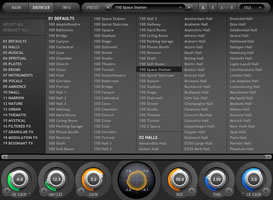 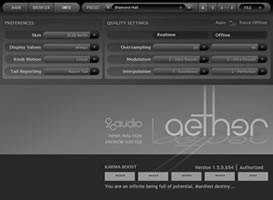 Unlike convolution reverbs, Aether is not a static process, and no two instances of Aether are ever exactly the same. The same is true in real world acoustical spaces as well: a building's acoustical character may vary slightly depending on several factors such as its current occupancy, and even more subtle things such as the current temperature and humidity. Thus, acoustic space itself is alive in the real world and is constantly shifting, morphing, and evolving to produce a complex array of potential impulse responses. A sampled impulse response of a real acoustic space, can be quite accurate for that particular moment, but it tells only part of the story. It is like a picture of a lake, versus the lake itself. A lake in the real world is unlikely to spontaneously develop waves the size of those found in the ocean, but it is never quite as still as a picture either. Aether's approach does not simply sample one static picture in time, but rather captures the complete subtly of the dynamic chaotic processes found in life and it retains all the detail and organic feel of these processes.

Aether's algorithm is conceptually divided into two parts: Early Reflections, and Late Reflections. The early reflections stage provides discrete delay patterns, which provide spatial cues that identify the nature of the given acoustic space. Aether mathematically calculates and subtly randomizes these ER delay patterns in pure floating point precision based on an incredibly complex algorithm that is designed to accurately mimic physical reality. This part of the algorithm consists of over 75 variable parameters which control the characteristics of the resulting ER patterns. In effort to maximize usability and user friendliness, this complexity is hidden from the user, and is instead wrapped into a single visual macro called Space Type. Thus the user does not have to deal with complex esoteric DSP parameters that only a physicist would understand and instead he simply chooses visually the type of environment he would like to use, and Aether makes the appropriate changes to the algorithm behind the scenes. 33 different default Space Types ship with Aether, and the interface provides five additional control knobs to customize their most important aspects. These controls allow adjustment of the size and geometrical shape of the Space Type default as well the positioning models used to determine where the sound source and listener are in the room.

In a real acoustic space there is no real distinction between Early and Late Reflections and the entire composite response of a real acoustic space consists of ERs, LRs, and frequency characteristics of the given environment. Thus in order to truly represent a given space accurately all three of these things should align to meet the characteristics of the acoustic environment. Aether offers an intuitive solution to this issue by providing a Link button that allows various parameters to be linked to the Space Type macro control. The additional ER controls, the LR controls, both set of controls, or none of the controls can be linked to Space Type. This way, when a user selects the "Telephone Booth" space for example, an appropriate size and reverb time can optionally be set automatically as well. Of course the linked parameters can then be adjusted by the user as desired and hybrid presets can also be developed by quickly combining the characteristics of two or more different space types. The end result is a balance of maximum ease of use and ultimate flexibility.

In addition to the intrinsic variance found at the very heart of the Aether algorithm, Aether also offers even more modulation possibilities to keep the verb from sounding dead and static. Two simple modulation controls are offered to invoke additional random LFO modulations in the Late Reflections section of the algorithm. The Modulation Rate and Period controls create musically-pleasing, randomly shifting resonances in the spectrum of the diffuse Late Reflections. Modulation period length extends to over eight minutes to allow for imperceptibly slow shifts in the resonance of the reverb tail that guarantee the reverb sound will never be exactly the same over the course of an entire song. This completely eliminates the metallic sound which plagues many inferior reverb designs on the market.

These specs continue at 2caudio.com/products/aether/

2CAudio is a sister company of Galbanum.

Since there's no review on KVR yet -

This is a versatile reverb that can be used anywhere I've tried to put it in a mix. It's an (adjective)-sounding reverb, capable of a lot of adjectives, and it bridges different uses of reverb - as subtle sonic reinforcement, or reverb as a dramatic effect - more seamlessly than I thought was possible.

While the raw aesthetics of the GUI have been debated on KVR (it's reskinable, anyway . . .), I've not seen anyone critical of how much functionality is packed into it. Stereo shaping, EQ'ing, and other fundamental sound-shaping tools are inside the reverb exactly where they need to be, and the early reflection / late reflection split is easy to follow.

The preset library is quite nice, and is comprehensive in that it covers small/large, subtle/dramatic, crisp/diffuse, etc. - it's reliable, and has solutions. Pro tip: clicking the master gain/mix text lets you lock those while browsing presets, an extremely useful function.

The early reflection 'rooms' are quite clever and very functional - while it seemed a bit gimmicky initially, after some time spent tweaking all over the map, the ER rooms are all unique, and all usable in various configurations of the rest of the reverb.

Haven't turned this thing off after weeks of demo'ing and a few days of having it registered, it's a work-horse and a show-horse.Read more