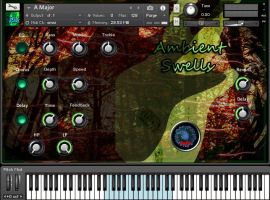 Ambient Swells by Boyss-Sound-e-Scapes is Soundware (samples or presets that load into other products).
Product
Version
1.0
Tags
Tags:AmbientAmbient SwellsBoyss-Sound-e-ScapesCinematicDroneEvolvingGuitarKontakt InstrumentMulti-SampledSwellsTextures
Soundware
For
Native Instruments Kontakt
Soundware
Formats
sfz
Copy Protection
None
My KVR - Groups, Versions, & More
2 KVR members have added Ambient Swells to 3 My KVR groups 3 times.
Not In Your MY KVR Groups
(or group limitation prevents versioning)
1 0 I Own This
+2 in private groups

Ambient Swells instrument is sampled guitar swelling chords. Triads second inversions exactly in all triad chord combinations (maj./min./dim.). When playing guitar no matter how you try to produce same sound by striking same chord and riding volume pedal by foot at same time its not gonna sound the same nor will this instrument too thanks to 3 velocity layers and 6 round robins in each velocity layer (for more organic feel). There is separate already mapped instrument patches for every major and minor key and additional: All Diminished / All Major / All Minor / All KEYSWITCH. To use it no musical background is needed, just choose key of the song, for example A minor, and play any combination of white notes in instrument range.

This instrument is good for adding ambient backgrounds for any kind of composition be it for video, game or music. Can be used for making backing tracks for ambient guitar players too. Swells are more emotive and organic than pads made by synthesizers. Due to making this instrument clean and by sampling individual chords instead of making production ready loops The Ambient Swells can be used over and over in audio production unlike other looped libraries with same theme. User has more freedom to shape his own sounds by using different kind of effects. There is more information in the included manual.

-Kontakt patches (with gui and switchable onboard effects, requires minimum Kontakt full version 5.4.1 and up), .

and unlocked wav samples (not loops). Note: there is also Zampler-RX fxb bank, bank is totally experimental, I guess Zampler doesn't support advanced optocodes from sfz. I left bank there (occupies only 1,5 MB) because maybe someday Synapse Audio will update it and until then Zampler bank can only be used for experimental sound design purpose.

Note: this isn't "normal" guitar sample library, its rather starting point for sound design where user dictates in which direction sound will go. Please try the free demo which has the following limitations: -Only 1 patch (full has patches in all keys mapped to every major and minor scale), -1 velocity layer (3 in full), -3 round robin samples (6 in full for each velocity layer)

Video demo project where you can see all notes/effects etc: