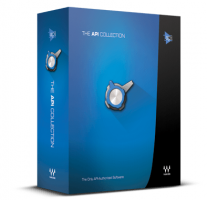 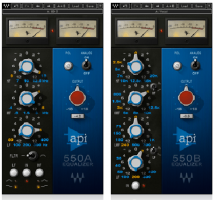 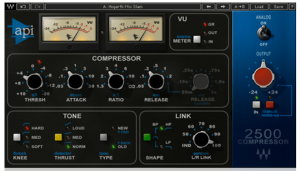 API Collection by Waves is a Virtual Effect Audio Plugin for macOS and Windows. It functions as a VST Plugin, an Audio Units Plugin, a VST 3 Plugin, an RTAS Plugin and an AAX Plugin.
Product
Version
11.0
Product
Version
11.0
Tags
Tags:Compressor/EQAPI CollectionCompressorEQGraphic EqualizerStereo CompressorWaves
Effect
Formats
Copy Protection
Online Activation (Challenge / Response)
My KVR - Groups, Versions, & More
52 KVR members have added API Collection to 11 My KVR groups 76 times.
Not In Your MY KVR Groups
(or group limitation prevents versioning)
37 +3 I Own This
17 +1 Favorites
11 +2 My Actual Studio
3 0 I Want This
2 0 My Perfect Studio
+6 in private groups

Used by engineers worldwide on countless hit records, these modules deliver a sound like no other. And with The API Collection, Waves captures every nuance of their unique sonic signatures:

The API 2500 is a versatile dynamics processor that lets you shape the punch and tone of mixes with absolute accuracy. Its dual channel design lets the 2500 also function as two separate mono channels via a single compression setting. Using auto-makeup gain, you can adjust Threshold or Ratio while automatically maintaining a constant output level. With both "feed back" and "feed forward" compression types, the API 2500 boasts a wide range of incredibly musical parameters which have made it a favorite of engineers the world over.

Modeled on the late 1960's legend, the API 550A EQ provides reciprocal and repeatable equalization at 15 points in 5 steps of boost, divided into three overlapping ranges. Its high and low frequency ranges are individually selectable as either peaking or shelving, and a band-pass filter can be inserted independently of all other settings.

The 550B, with its renowned four overlapped EQ bands, is invaluable as both a problem solver and a sweetening device. With 7 switchable filter frequencies spanning up to 5 octaves per band, the 550B's "Proportional Q" automatically widens the filter bandwidth at minimal settings and narrows it at higher settings. It even lets you undo previous processing, affect or even reverse tonal modifications. With their vast range of tonal possibilities, the API 550A and 550B are a pair of versatile EQs with that one-of-a-kind API sound.

Based on the 1967 classic, the API 560 10-Band graphic equalizer features precision filtering and high headroom, ideal for signal enhancement and room tuning. The API 560's curve shaping potential is unmatched, while API's unique "Proportional Q" design intuitively widens the filter bandwidth at lower boost/cut levels and narrows it at higher settings. And since boost and cut characteristics are identical, previous actions can be easily undone. For precision equalization with unmatched versatility, turn to the EQ heard on top recordings for decades: