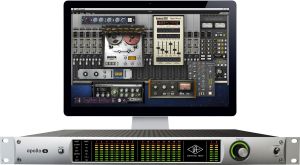 Interfaces
Thunderbolt Thunderbolt 2 Thunderbolt 3 USB-C
I/O
AES/EBU In AES/EBU Out D-Sub In D-Sub Out MADI S/PDIF Word Clock XLR Mic In
Power
PSU (Internal)
Driver
No Driver Required
My KVR - Groups, Versions, & More
6 KVR members have added Apollo x16 to 5 My KVR groups 6 times.
Not In Your MY KVR Groups
(or group limitation prevents versioning)
2 0 Favorites
1 0 I Own This
1 0 I Want This
1 0 My Actual Studio
+1 in private groups

Apollo 16 was designed to give users the feel and flow of analog recording, while maintaining the benefits of mixing and mastering in a digital audio workstation (DAW). Its included software turns Apollo into a fully-functioning mixing console and allows users to control its hardware settings remotely, solving studio workflow and monitoring annoyances.

With Apollo, latency is basically indiscernible. For example, when recording four "stacked" UAD plug-ins on the input in real time, analog-to-analog latency at 96kHz comes in at 1.1 milliseconds. With its onboard Realtime UAD Processing, Apollo 16 can retain its low-latency performance even in large sessions, and the user can leave their computer at a buffer setting that it can handle.

A Note about UAD Powered Plug-ins
UAD-2 and UAD-1 Powered Plug-Ins run exclusively on Universal Audio's UAD DSP Accelerator Cards. All available Powered Plug-Ins are included in the UAD Software Installer/Updater Package; and every Plug-In title has a separately activated 14-day trial -- so users can try before they buy, at their own pace. Once a user decides to purchase a Plug-In, they can click on the Plug-In toolbar "Buy" button, which automatically takes them to the www.uaudio.com website and carts the plug in; or this can be done manually via browsing our webstore. Once the purchase is complete, a downloadable Authorization File is made available. Users simply drag and drop this Auth. File into the UAD meter, and the Plug-In is authorized. UAD-1 users can transfer Plug-In licenses to UAD-2 format for free (one time only). Via Customer Support, Universal Audio also allows registered UAD owners to sell their UAD card(s) with Plug-In licenses, transferring the licenses to the new card owner (subject to Universal Audio approval).