ARP by Homegrown Sounds is a Virtual Instrument Audio Plugin. It functions as a VST Plugin. 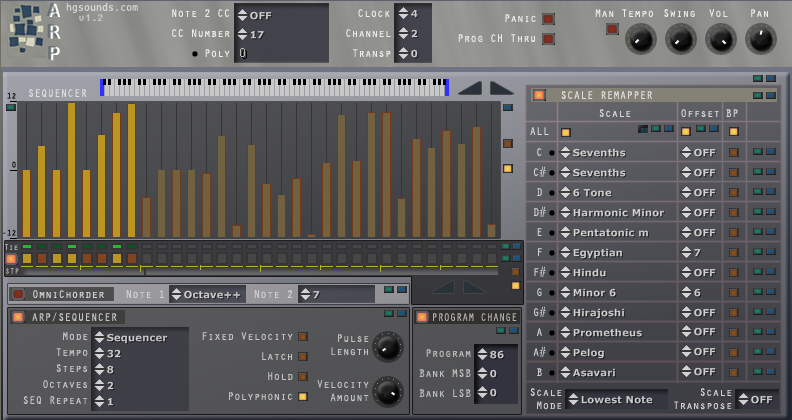 ARP is an advanced Polyphonic Arp and Note Sequencer with Scale Remapping for powerful sequencing possibilities. Sequences can be re-mapped based on the played note so, for example, a sequence can be forced to fit to the major scale. The idea behind this is to break away from the typical note sequencer where every key simply transposes the sequence, the ability to remap each note results in a much more creative sequence.

The Muter Section is a gate sequencer which decides which notes will play. ARP is also polyphonic and so can be used as a typical Gate Sequencer, or even more interesting as a polyphonic sequencer that syncopates. There is also the ability to offset the start note of each sequence so that when 2 notes are pressed together they automatically play syncopated. Finally there is OmniChorder which allows triggering up to another 2 notes when one note is pressed to create a chord, this becomes interesting when used with the Scale Remapper which can leave you with a selection of interesting one finger chords.

Just installed and poked around a bit. In a short time, I was able put to use in a sequence (FL Studio is my primary platform). With one track playing a melodic sequence and the Homegrown ARP track sent to the same synth via MIDI out, I had a nice "more complex" melody being generated. By simply toggling in the ARP on such controls as "latch", 'hold" and "polyphonic" ("muters" was the default selection in the patch I chose), I was able to very easily generate some very nice melodic variations.

Would lend itself nicely to live playing with controller buttons mapped to the ARP controls.

I may come back and rate it higher later. I gave it an "8" initially as I was able to get some fun results with not much effort. Downside is "lack of a manual or tutorial video" ... but the ARP VST is inexpensive. I may "up my rating:" later with more exploration. I only touched about 5% of it's features. This could potentially be a "10" in compositional variation value for this price range.

The demo version is fully featured, but times out after 30 minutes per session.... so anyone can try it out to see if it fits into your "melodic toolkit" before you buy.

Just an fyi there is a manual. Go to the directory where you installed it and there should be a sub directory called manual with a pdf in there. It covers pretty much everything