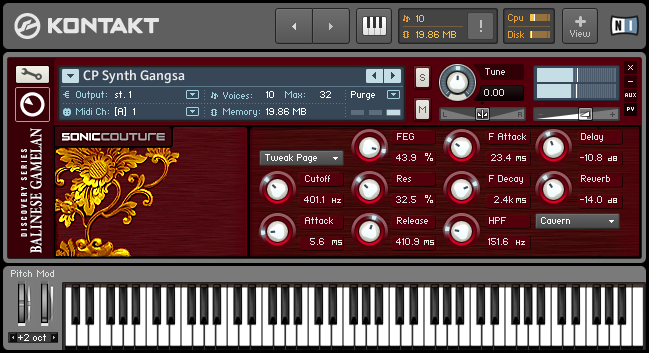 Balinese Gamelan is a Kontakt-Powered instrument that marks the second entry in the "Discovery Series". Created in collaboration with the Soniccouture, Balinese Gamelan offers a versatile assortment of ethnic instruments that represent the rich sonic heritage of classic Indonesian music, for use in film scoring, electronic music production and traditional compositions.

Balinese Gamelan faithfully recreates the charismatic sounds of the traditional Balinese orchestra with its diverse combinations of instruments. Three essential elements of the larger Gamelan ensemble are included; the melodic core instruments which comprise the Jegog, the Calung, and the Penyacah; the "Gangsa" which consists of the Ugal, Pemadé, and Kantilan metallophones; and the kettle gongs which include the Trompong and the Reyong. All instruments have been carefully recorded from the London Symphonic Orchestra's own "Semara Dana Gamelan Ensemble" in full detail, resulting in 2 GByte of studio-quality samples that are brought to life through the power of the Kontakt sampling engine.

Balinese Gamelan can be used both with the free Kontakt Player and with the full-featured Kontakt sampler, and makes extensive use of the advanced sound shaping and articulation features of the platform. Users can switch between original gamelan tuning as well as a western-oriented "concert" tuning, and an optional "Synth" version allows to creatively tweak the sound of individual instruments beyond their natural tonality. A "Jammer" function creates rhythmic patterns, while the typical detuned doubling of the Gangsa and other gamelan instruments can be conveniently controlled via dedicated parameters of the software.