Bamboo Dreams BaWu by Sound Magic is a Virtual Instrument Audio Plugin and Soundware (e.g. samples or presets that load into other products). It functions as a VST Plugin and an Audio Units Plugin. 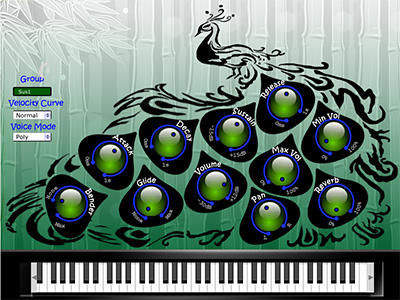 The bawu is a Chinese wind instrument. Although shaped like a flute, it is actually a free reed instrument, with a single metal reed. It is played in a transverse (horizontal) manner. It has a pure, clarinet-like timbre and its playing technique incorporates the use of much ornamentation, particularly bending tones. The bawu likely originated in the Yunnan province of south-west China, it has become a standard instrument throughout China, used in modern Chinese compositions for traditional instrument ensembles. The instrument is also closely associated with Hmong, Yi, Hani and other minority cultures in south-western China. It is typically used as a solo instrument, and is often featured in film scores; it is sometimes also heard in popular music recordings.

This over 1GB (500MB after compression) library covers nearly all existing performance skills of Bawu, with over 9 categories and 30 variations.

To ensure the maximum accuracy and musicality in the reproduction of this complex and beautiful sound, Sound Magic invited the virtuoso from the prestigious China National Philharmonic to record their wide variety of sounds. To make it easier for you to sound like one of these world renowned Bawu performers, Sound Magic has developed a simpler set of controls to let you control all 30 skills on the fly.

By using the best recording gear available on the market, including a Neve console, dCS AD converter and Beyerdynamic MC740 Microphones. Bamboo Dreams Bawu brings you super clarity and an expressive sound. Bamboo Dreams Bawu has been recorded with 24-bit/96kHz resolution for maximum fidelity.

Another critical feature in Bamboo Dreams Bawu VSTi is its use of the powerful Sound Magic Add-on System. Bringing unlimited extension possibilities to the instrument, each Add-on focuses on solving one specific problem with the aim of a thorough - but lightning quick - solution. Every musician has his/her own needs, their own challenges and the Add-on System is the ideal tool, providing solutions with great precision and flexibility. With the Add-on System, Bamboo Dreams Bawu becomes even more versatile. With the right Add-on, you can even create an awesome electric bawu.

sounds really out of tune. terrible..