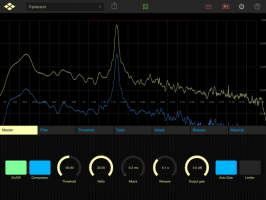 Bark by VirSyn is a Virtual Effect Audio Plugin and a Mobile Audio App for macOS, Windows and iOS. It functions as a VST Plugin, an Audio Units Plugin, a VST 3 Plugin and an RTAS Plugin.
Product
Version
1.5
Product
Version
1.5
Product
Version
1.0
Tags
Tags:FilterBarkVirSyn
Effect
Formats
Copy Protection
Dongle (USB-eLicenser)
My KVR - Groups, Versions, & More
11 KVR members have added Bark to 5 My KVR groups 14 times.
Not In Your MY KVR Groups
(or group limitation prevents versioning)
6 +1 Favorites
4 0 I Own This
2 0 My Actual Studio
1 0 I Want This
+1 in private groups

Bark is a multi-band filter plug-in that attempts to match the reception characteristics of the final destination of all sound: the ear. The ear behaves as if it contains a bank of filters, each filter passing frequencies within the critical band. In fact, the human ear also has its own built in compression system which is based on the critical bands. Consequently Bark incorporates an independent compression algorithm for each of its 27 bands.