BeatBurner by Code Audio is a Virtual Instrument Audio Plugin. It functions as a VST Plugin. 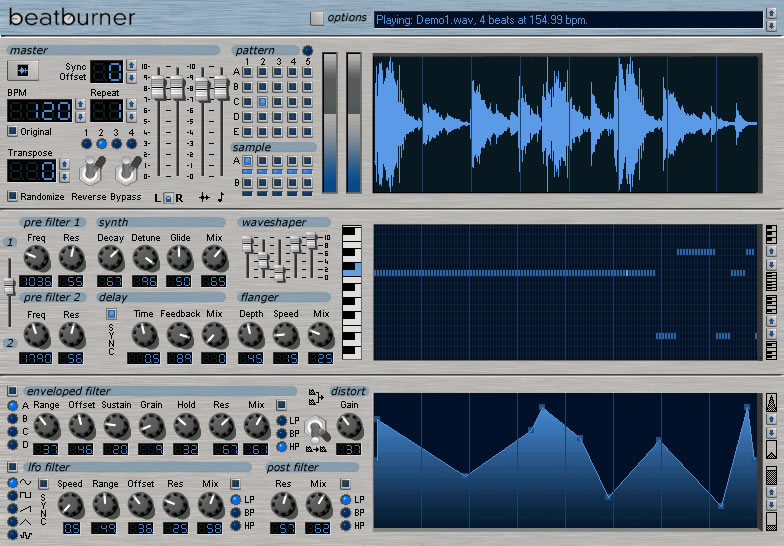 Using innovative wave shaping and filtration methods, BeatBurner turns innocent drum beats, loops or sounds into new, fresh and vibrant audio parts for you to incorporate into your musical arrangements. BeatBurner comes with a myriad of sample loops to get you started but it doesn't stop there, you can mangle, whittle or process any sound you want. Full automation and preset morphing means there are literally no limits to the soundscapes you can create.

This is one incredible idea that is credibly built and features a great, easy to work with interface. This is the kind of ensemble you'd want Reaktor to do but it doesn't have the filters for them nor the excellent user interface.

In terms of sounds, there's not much you can't do with BeatBurner other than going for ambient soundscapes. You can get execptional ambient sounds, but not the kind used as most musicians use it. Still, if you want throbbing bases, massive drum parts, a predictable, self-controlled bass and drum setup or threatening to eerie ambiences.

It all depends on what you use as a sample to get things started. Based on the 300+ mb sample library of drums and bass patterns you'll get some of the nicest changes of pace in what drums sound like or what bass to lead tracks can work. It's a wonderful sound that trancends styles. Ask yourself if you like synths that evolve or do unique things that are different but still useful? If so, you need to consider BeatBurner as part of your music arsenal.

It has crashed a couple times out of 100 but in general is well behaved. The presets are good ideas of what can be done with BeatBurner, a Code Audio product distributed by G-Media. If you like experimenting in any way this is your beat oriented synth....and you don't have to use only use drum samples. Anything with a well defined pulse will do. The results are up to you although Greg from Code Audio suggested working with the balance of the sample vs the synthesized sound. It's great advice as some sounds will sound unexciting until you do some tweaking of the two, and that goes for each part of the synth. The synthesis engine is unique and will be somewhat detailed in discussion.

BeatBurner is essentially a sample playback synth that is optimized for drum loops. You load a sample which shows up in a lane. It runs and you can see the transients available to you. The track itself is set up so you can apply as much or none of the original signal to the synth sample which too can be as quiet or loud as you please.

The synthesis part of BeatBurner is simple but sophisticated. Below the sample display are pitch (broken into many tiny individual segments, similar more to something that can be easily worked from on the pitch to several octaves in either direction off and for short to as long as the sample sequence goes. Below is a multipart envelope that controls the filter and LFO. Visual tools like these make the number of controls more worthwhile of exploring than some programing phobic souls will learn to put up with.

The pitch controller graphical window allows you to create pitch slides, create modulations like moving the pitch wheel on a controller might if you were good at carefully moving it up and down.

There are two pre-filters, meaning the filters are first in the chain rather than down the signal flow which is typically where it would be found. The synth engine is actually a five band waveshaper, similar to a EQ but controlling the signal rather than effecting it. There are also a more traditional 4 control synth engine that controls decay, detune, glide and mix. Fully counter clockwise there's no sound, the further clockwise the more effect on the signal chain. There is also a simple but great sounding delay effect and flanger.

Each pre-filter is available with a linear control for either or degrees of both available. This is similar to many synths that use oscillator faders if that helps you get a handle on things.

Below that and paired to the multi-stage envelope are additional(!) multi-envelope filters. If you are familiar with filters you get an idea how sounds can quickly be changed into something very unique by working with them. If you don't it will take you less than a few minutes to figure out how to use them. Beyond this is a distortion algorithm that is quite good, from subtle to woofer shaking into a multiple envelope LFO that is simply deadly for basses and transmuting drums into secondary, drone like sounds or at other times like having a sub-oscillator. And at the end of the chain, in case we haven't had enough fun with filters there is a post-filter.

This is a simple design, in some ways a precursor to monolithic synths like Symptohm:Melohman and being part of the G-Media family it's not all that surprising the whole system sounds like a fantastic drum mega-filter VST. Yet it is the ability to go the extra few small steps that makes BeatBurner so interesting. It has a lot of use as a drum synth or a rhythmic synth, even a synth line generator.

Pros: read the beginning of this review if you need more pros.
Cons: you need to save your stuff as it sometimes can crash. This may vary with computers.
Verdict: if you make beats and want rhythmic things to work with, this is itn and at an attractive price. Don't think tweaking works? Try hitting the randomize button, not only do you get changes but they're almost always good sounding and on of the best things found in 04!Read more

I tried the demo of the standalone version of this product about 6 months ago and I didn't particularly like it. This was probably down to the fact that being standalone made it difficult to try this thing's output in the context of a track, you had to export files and import them into your host and it was a hit and miss affair actually generating something worth using. I took a gamble on buying the VST version as I knew it had potential and my tracks are generally percussion driven. I took delivery yesterday (it's a boxed product), loaded it up, loaded a wav file into it and started hitting the randomise button. After doing so for five minutes, not only did I have a huge grin on my face but I had generated some great noises!!

The product comes with a load of drumloops and bass loops to get you started, but I only managed to audition two of these last night, purely because each loop is capable of such variation that you begin to realise the options are almost endless.

I'll probably edit this review in a week or so when I've got to grips with this product, but the fact that i've reviewed it so soon, means that either I'm a total idiot or this is an outstanding product (or maybe both).

I don't post reviews very often, in fact my only other review was for PhatmatikPro which goes to show how excited I am about BeatBurner - it's a stonker!!!!

My only real criticism is the less than comprehensive manual, but then you soon realise that by using the randomise button that you don't really need a manual.

Edited on 20/08/03. After using this thing for a week or so, it's still excellent. I've discovered that some of the best noises you can get out of it are if you put synth loops through instead of drumloops. It gives a real gritty lo-fi effect to the sounds, great for breakdowns in tracks. I think this could be looked upon as more of an effect than an instrument, but the fact remains that you can get some really evil noises going - great!Read more