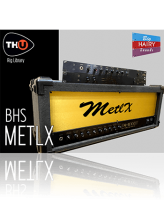 HOW TO USE IT.

BHS METLX by Overloud is a Virtual Effect Audio Plugin and a Standalone Application for macOS and Windows. It includes, and is therefore "powered by", TH-U Full, which functions as a VST Plugin, an Audio Units Plugin, an AAX Plugin and a Standalone Application.
The OS and Format icons below are for the latest version of TH-U Full. The version numbers are for BHS METLX.
Product
Version
1.0
Product
Version
1.0
Tags
Tags:TH-U Rig LibraryBHS METLXOverloud
Effect
Formats
My KVR - Groups, Versions, & More
0 KVR members have added BHS METLX to 0 My KVR groups 0 times.
Not In Your MY KVR Groups
(or group limitation prevents versioning)

BHS METLX is the TH-U expansion library, signed by Big Hairy Sounds, seeking to recreate the tones of 80's and 90's guitar legends like Zakk Wylde*, Warren DiMartini*, Paul Gilbert*, and others, based on Metaltronix GP-1000*, SP-1000* rack preamp and powers amps, as well as the M-1000* amplifiers.

The BHS Metlx library adds a brand new modulation rack effect into TH-U. The Symphonic 90 effect reproduces the unique '80s and '90s chorusing effect that was only available in specific rack effect devices. This is the essential effect if you want to recreate the Yamaha-style symphonic modulation.