Bowed Glass Clouds by Riot Audio is Soundware (e.g. samples or presets that load into other products). 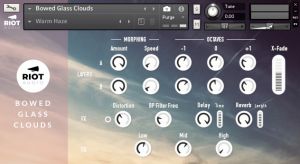 BOWED GLASS CLOUDS is Riot Audio's first release - a cinematic morphing pad instrument running in Kontakt 5.8 and above. It is based on recordings of bowed resonant glass bowls and jars, as well as a few selected sound design sources including a household hoover, and an Ebow-driven resonator guitar.

BOWED GLASS CLOUDS makes use of Kontakt's AET Filter technology to seamlessly morph between layers of sound, both tonal and non-tonal. The instrument has a simple GUI allowing for controls for the morphing within each layer (A and B) as well as adjustment of balance between these layers. Other controls include distortion, BP filter, delay and reverb as well as three-band parametric EQ.

BOWED GLASS CLOUDS is a one-page Kontakt instrument designed for ease of use and immediate results.

Much of the appeal of our CLOUDS engine derives from how it generates movement between different sample sources and groups. It contains two layers, A and B, each of which in turn contains a base sublayer and a target sublayer, i.e. four layers in total.

12 layers of sound in total: A/B layers with two sublayers each and a 3 octave spread.

Devil Soundz updates all their free plugins for Windows