Brainworx bx_opto Pedal by Plugin Alliance is a Virtual Effect Audio Plugin. It functions as a VST Plugin, an Audio Units Plugin, a VST 3 Plugin, an RTAS Plugin and an AAX Plugin. 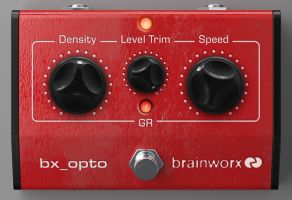 In addition to providing tone-laden compression, the bx_opto Pedal doubles as a gain pedal. By dialing-in the Density and Level Trim controls, you can add that little extra taste of gain and color that's needed.

Most optical compressors are appreciated for their musical, program dependent character produced by the light dependent circuitry of the sidechain. They allow users the ability to adjust the effect of this character by introducing a separate resistance circuit that gives some control over the compression envelope.

Brainworx decided to take a different approach to adjusting this compression envelope when modeling the bx_opto and bx_opto Pedal. The modeled physical constant of the Light Dependent Resistor (LDR) was influenced by those of very real compressors, but there is no separate envelope circuit. Rather, the constant is directly manipulated by the 'Speed' parameter of the plugin. This introduces a whole different approach to sonic character that is impossible to replicate with a 'real-world' optical compressor.