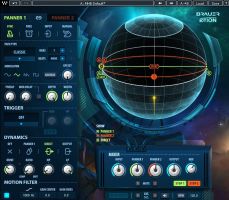 Brauer Motion by Waves is a Virtual Effect Audio Plugin for macOS and Windows. It functions as a VST Plugin, an Audio Units Plugin, a VST 3 Plugin and an AAX Plugin.
Product
Version
14
Product
Version
14.0.83.84
Tags
Tags:AutopannerBrauer MotionImagingPanningUniversal 2 BinaryWaves
Effect
Formats
Copy Protection
Online Activation (Challenge / Response)
My KVR - Groups, Versions, & More
40 KVR members have added Brauer Motion to 6 My KVR groups 48 times.
Not In Your MY KVR Groups
(or group limitation prevents versioning)
26 0 I Own This
14 0 Favorites
5 +1 My Actual Studio
+3 in private groups

Brauer Motion is a spherical auto-panner plugin for Mac and Windows that enables you to create a world of movement inside your mixes, designed with top mixer Michael Brauer (Coldplay).

Few people understand how to add emotional movement to a mix in the way that multiple Grammy -winning mix engineer Michael Brauer does. The man behind top-selling albums from Coldplay, John Mayer, Dave Matthews Band, Florence and the Machine, My Morning Jacket, Bob Dylan, Hall & Oates, Aretha Franklin and countless others, Michael has a deep understanding of how you can use movement to energize a mix.

Brauer Motion takes Michael's mastery of the sound spectrum and lets you control the movement of your sounds. It works especially well on rhythmic tracks such as percussion and acoustic guitar; on swelling pads and organs; or whenever you want to pull the listener in with subtle or drastic panning movement.

This creative plugin comes with four different panning modes to direct the motion of the sound; four different trigger modes for a variety of on/off options; two panners with full control; a dynamics section; pre-delay, motion filter, and precise control over the speed, width and depth; and a master section with gain and wet/dry controls.