Circular for Kontakt 5
by Homegrown Sounds

Circular for Kontakt 5 by Homegrown Sounds is Soundware (e.g. samples or presets that load into other products). 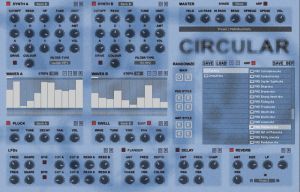 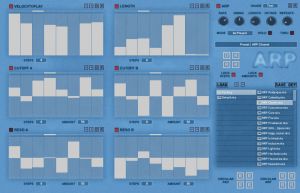 The initial idea behind Circular was to have oscillators which would play a different Waveform per Step. It turned out to be interesting, but I found that it needed something else to contrast the effect. After much experimentation with various ideas I opted for a Pluck Oscillator and a Swell/Fade In Oscillator which gave some much needed consistency to the rotating Waveforms of the main two Synths. I initially tried them with the same Filter and Mods, but in end decided to go along the lines of pre-filter digital synths from the 80s which rely on the actual waveforms brightness. I think this works great whilst the main two synth take care of the busy and complex sounds.

The Synth has no Panels and so everything can always be seen which makes editing easy and intuitive. However I thought that it's a shame to not have any sort of Sequencing as it's interesting with the Wave Cycling, and so decided to make an Arpeggiator in a different Script slot. It's an Advanced ARP with dedicated Sequencers for Velocity/Play, Note Length as well as both Cutoff and Resonances of Circular. Although it is a separate Script, the main Circular Preset system is used to store the ARP preset too, so that a complete Preset can be used. However there is also a Browser for the ARP which will just load the ARP portion of the Preset without changing the sound of Circular.