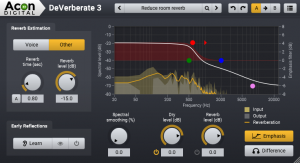 DeVerberate is a reverb reduction plug-in that can attenuate or boost the reverberation that is already present in recorded material. The new version includes an entirely new algorithm based on deep learning for fully automatic reverb reduction of recorded dialogue. By training a neural network on thousands of high-quality voice recordings and a wide variety of acoustical surroundings, the artificial intelligence can automatically separate dialogue from reverb.

The reverb reduction algorithm from version 2 is included for music and other audio sources. Both algorithms split the incoming audio into an estimation of the direct sound and the reverberated sound which can then be recombined freely. Additionally, a unique Early Reflections Filter that works in conjunction with the reverb suppression algorithms is included. The Early Reflections Filter uses sophisticated statistical methods to estimate the so called impulse response of the early reflections, which is then used to cancel out the effect of the early reflections.

Acon Digital DeVerberate 3 is available as VST, VST3 or AAX for both Windows and Mac or as AU plug-ins for Mac. There are 32 and 64-bit versions for Windows. The Mac version is 64-bit and runs natively on both ARM (such as Apple M1) and Intel processors.

I spent some evaluation time with DeVerberate and I came away smiling. Acon Digital continues to pursue excellence across their whole product line. I can honestly report that this plug-in does indeed accord a tremendous degree of control over the amount of perceived ambience heard in any audio clip. I found that it was entirely possible to remove offending "room" noise from less-than-optimal vocal tracks. This plug-in makes it easy to edit a live club or large hall recording and bring "focus" to the music whilst greatly lessening unwanted, "boomy" reverberation.

DeVerberate performs well and achieves better results than relying on transient shaping plug-ins for controlling ambience on prerecorded material. Priced at only $99, it deserves serious consideration in comparison to similar products costing three or four times as much. Of course, Acon Digital strive to improve all their audio-software on a regular basis, so future upgrades will assuredly keep this excellent "secret weapon" in the top tray of many engineers' tool boxes.

My one niggle with Acon Digital plug-ins is that although you can manually type/enter values, this feature doesn't work in one of my favorite DAW's; "Mixcraft Pro Studio 6". Keyed in values are accepted in a couple of other DAWs that I've tested.

Can I use Acon Digital DeVerberate with any of the following: Final Cut Pro (FCP7), Adobe Premiere Pro or Adobe Audition?

Preferably I would like to use it with Audition.

Thanks for the interest! Yes, DeVerberate works fine in all of these, including Audition.

What about the delay it introduce? Is it good for live (like video streams, where big delays are breaking lipsink)?

Thanks for the interest! There's a 1536 samples latency at 44.1 kHz so it's not ideal for real-time video, I'm afraid. The early reflection filter has zero latency, so it's the reverb tail suppression that introduces the latency.

is there a manual for DeVerberate 2? And if yes, how do you get it?

Hello, I'm just a user (I don't work with Acon Digital), but just go to the Acon Digital site, Downloads, DeVerberate2, click on the + to expand the view, as usual, and you will see it:

Thank you, XComposer. You made my day.

Thank you, XComposer. You made my day.