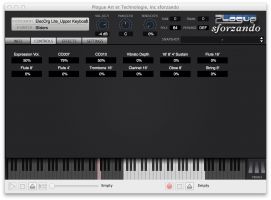 Embrace the fun, and sometimes cheesy, sound from a spinet organ, believed to built in the late 70s/early 80s! The tone generator for this organ is derived from a sawthooth wave, unlikeHamOrg, my other virtual organ, which is based on a sine wave. Full List of Sounds.

- Works with Plogue's sforzando, a free SFZ player that functions as both a standalone player and a VST/AU/RTAS/AAX plugin, for use in a DAW or notation software.