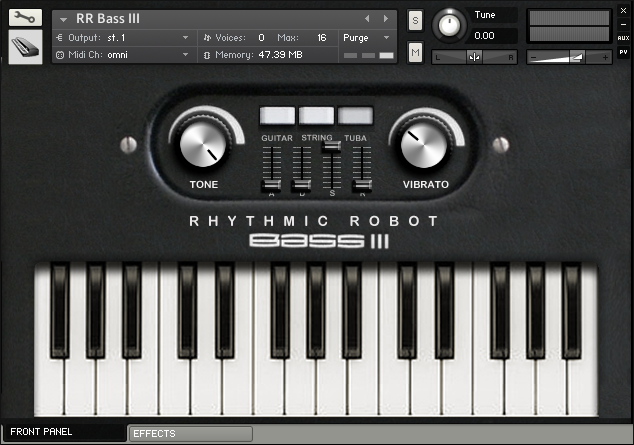 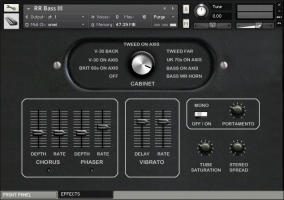 Plug-in, App & Soundware Format(s)
Operating System Availability
Audio Demos
Bass Iii Demo
Miscellaneous Information
Important Note
Requires a FULL version of Native Instruments Kontakt version 4.2.3 or higher (all versions of Kontakt 5 supported). Kontakt Player is NOT recommended and will time out after 15 mins or so. PLEASE MAKE SURE YOU HAVE A FULL VERSION OF KONTAKT BEFORE BUYING, AS WE CAN'T GIVE REFUNDS FOR SOFTWARE BOUGHT IN ERROR!
Max. 6 items
Latest Version Changes [view all]
Any OS Version
1.0

Rhythmic Robot's Bass III is a Kontakt sampled version of the Hohner Bass 3 key bass. This compact analog bass monosynth featured three preset tones (Guitar, String and Tuba). Of these, Guitar was characterised by a sharp plucked attack portion to the sound which helped drive it through a mix, while String was a mellower version of the basic Guitar tone, and Tuba was a much more raucous, squarewave-style patch with lots of overtones. The Bass 3 featured a short two-and-a-half octave keyboard built into a black leatherette-covered suitcase which could often be seen perched on top of electric pianos or string machines on stage. This characterful form factor has been replicated in the software user interface.

The software version samples the original instrument at 24-bit, and adds considerable extra versatility, with full ADSR envelope control, effects, speaker cabinet simulation with a choice of cabs, and tube saturation all built in. Vibrato with controls for rate, depth and delay is available, plus stereo spread and control over the glide (portamento) speed in mono mode. Polyphonic playability is also included if desired.

The Bass III also features an "All Buttons Out" mode completely unavailable on the original instrument, which combines all three Preset tones into one monster patch.

Bass III is available now for and requires Kontakt version 4.2.3 and above (including Kontakt 5). Not compatible with Kontakt Player.