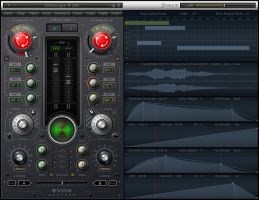 EVOX Calypso by 2MGT/Metamusic Generative Tools is a Standalone Application for Windows. It functions as a Standalone Application.
Product
Version
1.0
Tags
Tags:Experimental Soundscape Synthesizer2MGT/Metamusic Generative ToolsEVOX CalypsoVirtual Soundscape Generator
My KVR - Groups, Versions, & More
27 KVR members have added EVOX Calypso to 9 My KVR groups 35 times.
Not In Your MY KVR Groups
(or group limitation prevents versioning)
16 0 Favorites
11 +1 I Want This
2 0 I Own This
+6 in private groups

EVOX Calypso is an experimental sound, performance-oriented virtual musical instrument that is designed for creating cinematic ambient soundscapes, sound structures, and atmospheric and ethereal textures, as well as more traditional synthesizer sounds that can be layered to create a tremendous variety of spatial sounds. EVOX Calypso sounds extend to unattainable distances, immersing you in unexpected worlds. The tool includes more than 128 ready-to-mix presets.
EVOX Calypso is Free/Donate. The Free version has some limitations. A version available to supporters includes a package of additional presets for synthesizers, effects, and track models.No installation is necessary, and it works without problems in Windows XP and Windows 10 (32/64-bit). (EVOX Calypso is 32-bit.)
EVOX Calypso is an standalone tool application for Windows that employs Wavetable / Granular synthesis in two separate and programmable layers each with extensive FX, Modulation Matrix and Chord Sequencer modules which provide the user with maximum control over unique sound creation.
As an experimental synthesizer, it radically departs from standard type instruments and is meant to be used as a laboratory for the exploration of new sonic and timbral creations. Playing EVOX Calypso is not like playing a conventional synthesizer, it does not have a keyboard and MIDI GUI like conventional synthesizers. Sound manipulation is carried out by built-in modulators and sequencers.
EVOX Calypso also has an 8-track sequencer with up to 64 steps for each track. Each track is essentially a separate synthesizer that can be recorded and played back in sync with the other tracks. Mini compositions can be made by merging these tracks together.

Wow, for free it is amazing! A must-have for all ambient sound lovers. Nice GUI and a lot of possibilites for playing around and having fun. 5 Stars. If it were a VST I would give 6 Stars. :-).

EVOX Calypso is the most weird and wonderful synth I have ever heard. It is standalone and there is no keyboard. It produces the most amazing, bizarre and beautiful soundscapes. Creators of soundtracks and ambient music will absolutely love it. The possibilities seem endless. I cannot thank the developers enough.