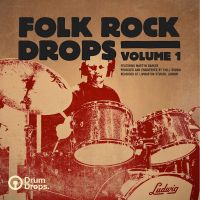 These tracks take reference from artists such as John Martyn, Traffic, Neil Young, Nick Drake, Fairport Convention and Bob Dylan. Ranging in tempo from 74 BPM to 162 BPM there is a huge range of tracks and grooves to choose from. There are a few 3/4 options, plenty of shuffles, and a couple of tracks were played with brushes and hot-rods.

For the sound Phill Brown (John Martyn, Bob Marley, Rolling Stones, Talk Talk, Led Zeppelin) used his years of accumulated knowledge and went back to the time of the 60s when he was based at Olympic Studios.

Phill's idea was to create a 1960s drum sound with a modern twist. Instead of positioning the microphones close to the kit he wanted to capture a natural drum sound and record the 'dead' room. He used only five microphones on the kit: one on the kick, the snare, two kit microphones placed around the kit which provide a surprisingly good stereo picture, and a mono overhead.

All of the mics were recorded through API mic pre's and recorded straight to 2" tape on a Studer A80 with a 16 track headblock before being transferred into Pro Tools.

Martyn Barker has had a career playing the drums professionally for over 30 years. He started his career with the band Shriekback and is a busy session drummer recording and touring. Martyn has played for artists such as Martha and Rufus Wainwright, Richard Hawley, Katherine Williams, Lou Reed, Peggy Seeger and he also played drums on Joe Boyd's 'Way To Blue' making him the perfect choice for this album.

All sixteen tracks can be purchased as individual tracks, as multi-tracks (unmixed), stems (mixed) or drum loop packs. The multi-tracks come with a tempo map and OMF file to export into other DAW. We also provide templates for Pro Tools, Logic, Cubase, Reason, Reaper, Studio One and Ableton Live and the audio comes as 24-bit WAVs. The multi-tracks also include a selection of multi-track loops which are split up into intro, verse, chorus, bridge, middle 8 and outro. There are different numbers of bars and the loops are fixed to the tempo meaning they can be used to build a track easily.

The stems and mix packs which have all the drum parts and percussion as separate stems come as 24-bit WAVs and a tempo map. The stems and mix packs also contain stem loops which are built in the same way as the multi-track loops and split into song components such as intro, verse, chorus, middle 8, bridge and outro.

The loop packs contain about 6 x 4 bar loops from each drum track. The loops are broken down into each component EG full mix with and without EMT plate, with and without percussion, and they come formatted as 24-bit WAVs, Apple Loops and Rex 2 files. Each track can be purchased track-by-track or if you buy the album (in any format) you get 20% off the price.

For a little intro teaser video we made please head here: {See video at top of page}

To hear demos of the album head to the Drumdrops site and listen to up to 1 minute of each track.

For every new customer that signs up they will receive 20% off their first purchase with a voucher code given out on sign up, however they can also receive one of the tracks from Folk Rock Drops as a multi-track, stems pack and loops pack.