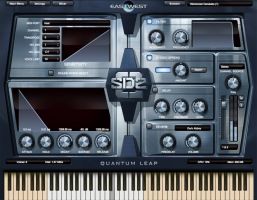 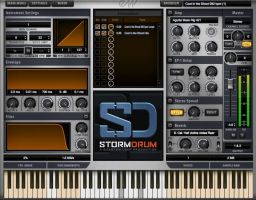 Stormdrum 2 Pro Bundle by EastWest is a Virtual Instrument Audio Plugin and a Standalone Application and Soundware (samples or presets that load into other products) for macOS and Windows. It includes, and is therefore "powered by", Play, which functions as a VST Plugin, an Audio Units Plugin, a VST 3 Plugin, an AAX Plugin and a Standalone Application.
The OS and Format icons below are for the latest version of Play. The version numbers are for Stormdrum 2 Pro Bundle.
Product
Version
1.0
Product
Version
1.0
Tags
Tags:DrumsDrum CollectionEastWestPercussionStormdrum 2 Pro BundleVirtual Instruments
Instrument
Formats
Soundware
For
EastWest Play
My KVR - Groups, Versions, & More
4 KVR members have added Stormdrum 2 Pro Bundle to 4 My KVR groups 4 times.
Not In Your MY KVR Groups
(or group limitation prevents versioning)
1 0 My Actual Studio
1 0 Favorites
1 0 I Own This
1 0 I Want This

Stormdrum 2 is the sequel to Quantum Leap Stormdrum (one of the best selling acoustic percussion based virtual instruments ever released).

Quantum Leap SD2 is over twice the size of the original Stormdrum, featuring over 12 Gigabytes of ALL New (except the included Metallica black drum kit from Ministry Of Rock) acoustic percussion instruments. The unique selection of drums and percussion included exceeds all other collections. As a sequel to Stormdrum it sets new standards that will exceed the expectations of everyone who owns a Quantum Leap product.

Also included are 100+ film score oriented MIDI performances, each with dozens of variations, intros and endings from bombastic to hypnotic. The Play software allows for millions of variations of each MIDI performance so you can create custom performances at any tempo without any loss of sound quality because the samples are not time-stretched, only the sequencer tempo is changed. Want to slow it down from 120 BPM to 50 BPM? Simply change the tempo of your sequence, the sounds will remain pristine. Want to change the tone to something more aggressive, or something more subtle? Simply change the dynamics and marvel as 24 velocity multi-sampled percussion creates a completely new sound. Want to tune, add effects or filters to specific drums? No problem. Want to mute specific sounds and play in your own parts? No problem. Sound replacement? No problem. Like the sound of a performance, but don't like the rhythm? Simply use the current multi to create your own rhythms.

Drawing from the secret collections of three percussionists, Quantum Leap SD2 - The Next Generation features some of the most amazing, and unique multi-sampled percussion imaginable, all recorded with vintage Neumann microphones in the famous EastWest Studio 1 (formally United-Western) for that unmistakable Hollywood sound-stage vibe and a sound far beyond any other commercial percussion collection.

Stormdrum 2 Pro is an expansion for Quantum Leap SD2 - The Next Generation with over 4 gigabytes of additional samples. Quantum Leap SD2 Pro is only available as an upgrade to registered owners of SD2.