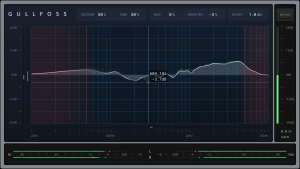 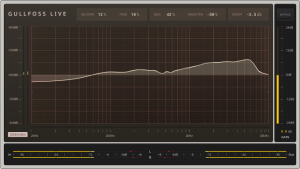 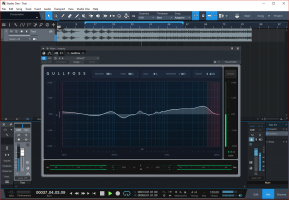 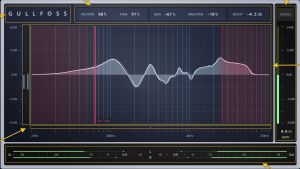 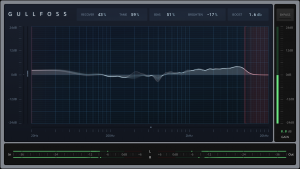 Gullfoss by Soundtheory is a Virtual Effect Audio Plugin for macOS and Windows. It functions as a VST Plugin, an Audio Units Plugin, a VST 3 Plugin and an AAX Plugin.
Product
Version
1.11.2
System Requirements
Windows 7 or greater.
Intel, AMD or compatible processor not older than 2008 and with support for SSE3.
Graphics processor with support for OpenGL 3.2 or later.
iLok License Manager for activation. USB dongle is not required.
64-bit plug-in host with support for AudioUnit, VST, VST3 or AAX.

Gullfoss is an intelligent automatic equalizer that uses Soundtheory's unique computational auditory perception technology to identify and resolve problems in the frequency balance of your signal. Adjusting its settings in realtime according to the audible features of the input signal, Gullfoss allows quick and precise fixes for issues that would otherwise be unsolvable or would require a lot of time and experience to resolve.

Gullfoss is an easy-to-use tool for everyone from the amateur musician to the professional mastering engineer. Its clean user interface offers a set of basic parameters that can be adjusted to improve the clarity, detail, spatiality and balance of a mix or recording in a matter of seconds. Gullfoss is even capable of fixing balancing issues between different sound elements without access to the individual tracks. The internal auditory model allows Gullfoss to make objective decisions about the perceived sound. As a result mixes processed with Gullfoss will generally translate more consistently between different listening situations.

Gullfoss, enabled by new patent-pending equalizer technology, processes audio with unrivaled sound quality. The equalizer is capable of changing its frequency response, at the highest precision, more than 100 times per second and without introducing audible artefacts or degrading signal quality. Together with the highly advanced computational auditory perception model that has been developed by Soundtheory, Gullfoss is the first and only product of its kind.

Visit our website for sound examples. Download the time-limited trial version to hear Gullfoss in action and find out what it can do for your sound.

This is a marvelous product with enough control, but completely novel. Instead of presenting long term areas of concern, it follows the partials of your musical file in real time, adjusting 100*sec. I highly recommend it.

The controls are either 0-200 (first 2 below) or positive/negative amounts of the parameters as follows:

TAME. (This evidently sets the degree to which the program looks for problem resonances on a moment-to-moment basis.).

RECOVER. (Similarly, this evidently sets the degree to which the program looks for areas which would be masked by other louder.

BIAS (POS-NEG - SETS THE RELATIVE PERCENTAGE BETWEEN TAME AND RECOVER IF THE DECISION IS A GRAY AREA FOR THE PROGRAM).

There are also drag bars that let you limit what is included in the processing, or let you exclude a range.

I tried it on synths like Omnisphere and Falcon 2, bass, pianoteq and drums, and it has made it possible (not magically) to rapidly adjust the individual tracks so that future composing with them is more easy, and they will sit more transparently in the mix.

Once this is done, you can use it to process the final mix and further clean it up (if it is even necessary).

I experimented with pianoteq, and tried placing a reverb (EW spaces) then gulfoss after it, then Fabfilter Pro Q3. Fabfilter Pro Q3 was helpful to boost any little area of the sound that I was sorry for Gullfoss to have reduced - which was only necessary in very tiny areas of the spectrum (I did this as well on BFD3, getting more clarity but keeping a little character, just a 20-40 hz area that Gullfoss would have reduced in its limited computer wisdom).

Using it on pianoteq like that I was easily able to set it up so that even those rumbling bass piano tones were manageable, and I could literally play more harmonically rich material and still remain inspired. There wasn't the "deadening effect" that would normally happen if playing 10 notes including those low bass tones. In other words it kept it clear. My settings were not really extreme. The parameters offer wide enough control, that you can be subtle or you can overdo it if you want. You could use it as an fx by overdoing it as well.

As a guitarist, you could also run it in real time, it is not terribly CPU heavy, and if you set it to taste, your audience probably will hear what you play more clearly.

I bought it on sale but I'm interested in supporting the developers because they are really putting out some deep stuff here.

I don't think using this program ignorantly is really going to commonly produce trashing sounding stuff. Its practically idiot proof as long as one is a sincere student of mixing.