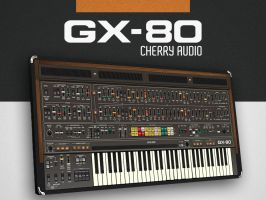 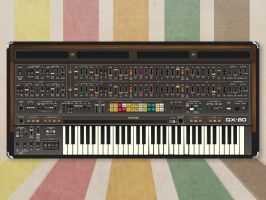 GX-80 is a transformative virtual synthesizer that combines the unparalleled sound and features of the fabled GX-1 "Dream Machine" and its renowned descendant the CS-80, to create a powerhouse hybrid. Featuring the carefully crafted and intensely circuit-modeled DSP designs of award-winning developer Mark Barton, Cherry Audio has replicated every subtlety of the classics to create the most authentic emulation of its kind.

More than a Replicant

GX-80 is not just another CS-80 emulation. GX-80 adeptly integrates the GX-1's distinctive feature set into the CS-80 architecture; most significantly, the massive dual-layer architecture that effectively made the GX-1 the equivalent of two CS-80s and then some. The GX-1's unique highpassed resonant pulse and bandpassed sawtooth waves, octave-up triangle wave, and filter envelope inversion are incorporated, opening up a new universe of sonic experimentation. Most notably, GX-80 includes an expert reproduction of the legendary GX-1 filter, delivering exquisite timbres that even the mighty CS-80 cannot produce.

GX-80 boasts an impressive, dual-layer voicing architecture outfitted with 16 polyphonic voices per layer. The instrument is capable of sounding two different CS-80 style sounds simultaneously, while panning each rank independently, to produce exquisitely rich stereo timbres and complex, layered sounds. For ultimate flexibility and expressive performance, GX-80 provides a split keyboard mode and a clever option to simulate polyphonic aftertouch with a monophonic aftertouch controller. What's more, the GX-80 comes pre-loaded with over 1,000 expertly designed presets and equipped with studio-grade effects, meaning jaw-dropping sounds are no more than a few clicks away.

GX-80 is more than a best-of-both-worlds interpretation of the past, and far more than a replicant. Cherry Audio's GX-80 is an unprecedented gateway to the sounds and music of an unrealized future.

In 1973, the most technologically advanced polyphonic synthesizer ever conceived was released. Featuring groundbreaking advances in polyphony, velocity and aftertouch sensitivity, along with four ranks of incredible sound quality, the GX-1 was a quantum leap forward from its contemporaries. It was produced in extremely limited numbers (estimated at around 20) and cost $50,000. As a result of its immense size, weight, and price tag, The Dream Machine, as it was known, was available only to the most well-heeled professional musicians. Only a handful of these instruments survive today. Notable users of the GX-1 and tracks featuring it included Keith Emerson ("Fanfare for the Common Man"), Stevie Wonder ("Village Ghetto Land"), ABBA ("Lay All Your Love on Me"), and John Paul Jones of Led Zeppelin ("All My Love").

Though their outward appearances were radically different, the GX-1 and the CS-80 instruments were very similar under the hood. Both featured a voicing architecture based on "ranks," wherein each rank was a complete synthesizer voice consisting of an oscillator, highpass and lowpass filters, a noise generator, a sine wave oscillator, a VCA, and envelope generators for both the filter and VCA. The CS-80 included two of these voice ranks, each capable of playing up to eight independent polyphonic notes -- a total of 16 synth voices under the hood. The GX-1 featured four of these eight-note poly voice ranks, assignable across two keyboards, plus a single solo synth voice rank for its three-octave mini keyboard and another synth voice rank for the pedalboard.

Unlike the CS-80, the GX-1 was strictly a preset instrument. Though it had no onboard synthesizer parameter controls, its analog synthesizer voicing could only be programmed using an external hardware programmer box through a very elaborate procedure.

On the other hand, the GX-1 had several tricks up its sleeve that were not passed on to the CS-80. The GX-1 oscillator section featured a pulse wave with an adjustable highpass resonator and a sawtooth wave with a dedicated bandpass resonator, in addition to and in parallel with the standard pulse and sawtooth wave outputs. Additionally, it had an adjustable octave-up triangle wave, a filter envelope inversion option, and a VCF comprised of highpass and lowpass filters with such immense range that they are still considered legendary to this day.

More than the Sum of its Parts

A virtual reproduction of the CS-80 has long been the most popular request from Cherry Audio fans. The company began work in 2021 to make the dream a reality. DSP designer and developer Mark Barton's extensive research of the original CS-80 and its schematics led him back to the CS-80's predecessor, the indomitable GX-1.

"The CS-80 was loathe to give up all its secrets," says Mark Barton, whose work on deciphering its audio path was exemplary. "As soon as we found something we thought strange, we immediately verified the behavior on both CS-80s we used for modeling. We then did a deep dive into the schematics to verify why we were hearing what we were hearing."

As a result, GX-80 combines all of the sonic characteristics of the originals with exceptional accuracy. When enhanced with GX-80's discrete layer volume and panning controls, the result is a colossal dual-layer voicing architecture, 16 polyphonic voices per layer, with two different timbres simultaneously playable in a split or stacked layer mode.

But Cherry Audio didn't stop with the extraordinary sound, as the originals were also revered for their magnificent, expressive performance features. To provide an experience as close as possible to the original hardware, GX-80 adds a split keyboard mode and support for both polyphonic and monophonic aftertouch controllers. Further, Cherry Audio has added an innovative "last-note priority" mode for simulated poly aftertouch response with a monophonic channel aftertouch controller.

With its dual-layer interface, over 1,000 stunning presets, and integrated studio-quality effects, GX-80 is a singular effort worthy of the "flagship" label.

At last count, only a dozen operating GX-1s have been accounted for, and used CS-80s are rarely listed for less than $60,000. The rarity and exorbitant cost of both instruments has made it impossible for musicians to experience these legendary instruments. That's why Cherry Audio is making its flagship GX-80 synthesizer available at an astoundingly low price that anyone can afford: only $59.

GX-80 is also available as part of Cherry Audio's new and comprehensive Synth Stack 3 collection, which features all of its virtual instruments to date at an even more astonishingly affordable price.

Good sound, but killer of CPU !.