Heatwave: Massive Synthwave Presets by ModeAudio is Soundware (e.g. samples or presets that load into other products). 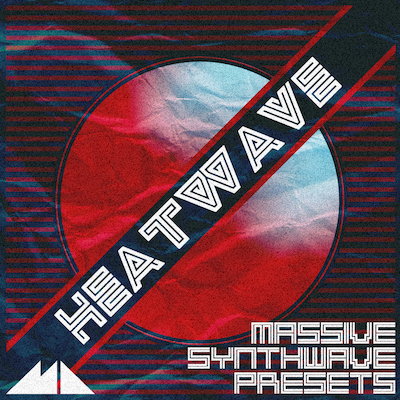 Heatwave - Massive Synthwave Presets from ModeAudio will take your music on a deep-space voyage through classic, analog-style synths, monolithic bass, shimmering, inter-galactic SFX and beyond. Blending warm, sweeping, cinematic pads and sinister Sci-Fi synth arps with cutting-edge, hyperactive synth leads and bass patches, this release presents a set of 50 truly expressive, deeply characterful sounds primed for use in any production you choose to use them in.

Making extensive use of Massive's unrivalled synthesis, modulation and processing abilities, we've sculpted filter envelopes, layered oscillators, set LFO networks to work, dialled in feedback and coaxed modulation oscillators into life in the creation of this pack. From soaring filter resonance, subtly swaying pitches, low-mid EQ warmth, mellow wave-shaping grit, sparkling washes of noise and beyond, each and every Massive preset included has been designed from the ground up to deliver as much retro-futuristic vibe as humanly possible.

From the dark, dystopian film & TV soundtracks of the 80s right through to vibrant, technicolour Synthwave, Footwork, future D&B and more, these sounds push waveforms, filters, EQs and SFX units into overdrive to beam the explosive heat of the sun though your music.

This library of vintage sounds is made even more flexible and versatile thanks to full velocity control, aftertouch modulation and light touches of random programming, resulting in patches that burst with internal movement and life that can be controlled by your performance. The sounds also offer a complete set of 8 macro controls each for instant tweaking and effortless evolution - automating in complex sonic evolutions is only ever the touch of one macro control away.

My KVR - Version Control & Lists
Not In Your MY KVR Groups
(or group limitation prevents versioning)
1 person has added Heatwave: Massive Synthwave Presets to 1 My KVR group 1 time
+1 in private groups