HGS WAV Recorder X by Homegrown Sounds is a Virtual Effect Audio Plugin. It functions as a VST Plugin. 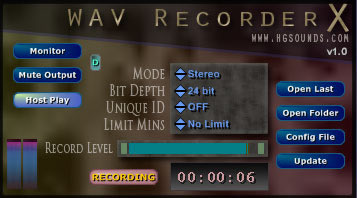 HGS WAV Recorder X is a VST Plug-in that adds advanced features to the freeware HGS WAV Recorder. The main new feature is the ability to do multiple simultaneous recordings throughout the host, either when record is enabled or a second mode allows it to only record whilst the host is in playback mode. A usage example is that you could put a recorder on insert strips of multiple channels, start playback and record each track to a separate WAV which would all be synchronised. This is ideal for recording many tracks in a project simultaneously and in realtime, ready to import into a different sequencer.