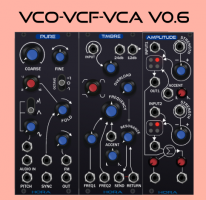 This VCV rack plugin is made of three main modules wich generaly form the sound path of synthesizers: the VCO, the VCF and the VCA.
"Pure" (VCO), "timbre" (VCF) and "amplitude" (VCA, mixer, inverter, attennuator, VC polariser...) are the firsts modules of this plugin
that will be fill with some others module.

The free version of this plugin available from the download page offer "Amplitude" the VCA/mixer/polariser/inverter module.

Here is a quick test of the modules making a bit agressive bass line.

Pure VCO is a voltage control oscillator that generate complex waveforms. The core's wave can be morph from sine to tri and then is folded in a specific way to give harmonics witheout generating sharped edges in the folded waveform.
A switch allows to use an other type of folding that create imbalanced folding: folding that create different ampitude in the resulting ripples. This create different rich harmonics in a way that avoid aliasing.
The module can also be used as an audio effect (voltage controlled wave folder) that can give harmonics or distord the signal in a very specific way.

The VCO can also be used as an audio effect (distortion/wave folder):

Timbre is a 4 modes VCF that is inspired by experiences relative to hardware filters designs and by analysis, copy and modification of OTA VCFs. It is not based on the same filter algorythm than the VCV modules
and is develop with vult (trans-compiler for high performance DSP developed by Leonardo Laguna Ruiz).

This filter algorythm offers non linearity into the gain structure
of the filter and offer a particular resonance. The resonance can also be "overloaded", this stub out resonance and give particular warm bass sound in low pass mode.

It was very funny to test differents sound path circuitries for the feedback loop (linear, non linear, clippy). Then, the module allows the users to do the same. The filter offer send and return in/out that bypass the internal feedback loop and allow to modify it with sound effects or VCA to get voltage controlled resonance.

An other particular feature of this filter is the accent input that can be used for XoX bassline sequences.

Amplitude is made of two VCAs that offer voltage controlled attenuation-inversion (called strength). The two VCas outputs and an aux input are send to a mixer (the aux input has a dedicated attenuator).

It also includes a led quadrant on each VCA:

Like on the "timbre VCF" there is an accent input for x0x style sequences.
This modules is more than a VCA and can be used as a mixer, attenuator, inverter, VC polarizer, ...