HoRNet HDS1 by HoRNet is a Virtual Effect Audio Plugin. It functions as a VST Plugin, an Audio Units Plugin, a VST 3 Plugin, an RTAS Plugin and an AAX Plugin. 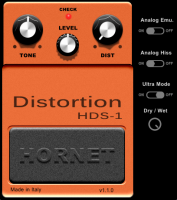 HoRNet HDS1 is a guitar distortion modeled after a famous pedal produced by a Japanese manufacturer since the latest seventies.
The sound of the pedal can be recognized in many recordings of the last 30 years, it's a simple but effective circuit, that often is criticized for being too harsh sounding, for this reason many modifications have been created, and we decided do emulate also the most famous one the "ULTRA" mod.
The pedal's job is to distort the guitar sound and this is accomplished by three different stages, the first is a simple transistor boost that also shapes the frequency response boosting the highs, the second stage is a dual op-amp amplifier that provides the gain for the clipping stage and also a variable lowpass filter (the more gain, the lowest the cutoff point). The final stage is a diode clipper that brutally limits the signal creating the hard distortion.
This kind of distortion is symmetrical and creates even harmonics, while powerful this distortion is not the most pleasant to the ear, the ULTRA mod overcomes this by replacing one of the diodes with a LED, this creates an asymmetrical distortion and introduces odd harmonics creating a more pleasant sound. In this mode also the pedal frequency response changes, it's like you have two different pedals in one.

Looking For Hardware Setup For Church - Money No Issueby wagtunes @ 21:44 in Hardware (Instruments and Effects)

the not so clever band name threadby vurt @ 21:40 in Everything Else (Music related)

The quoted out of context threadby vurt @ 21:37 in Off Topic Classics