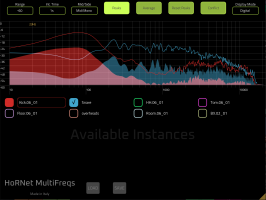 HoRNet MultiFreqs by HoRNet is a Virtual Effect Audio Plugin for macOS and Windows. It functions as a VST Plugin, an Audio Units Plugin, a VST 3 Plugin and an AAX Plugin.
Product
Version
1.0.0
System Requirements
Windows vista and later with openGL support
Product
Version
1.0.0
System Requirements
macOS 10.11 and later with Metal support
Tags
Tags:Spectrum AnalyzerHoRNetHoRNet MultiFreqsUniversal 2 Binary
Effect
Formats
Copy Protection
None
My KVR - Groups, Versions, & More
4 KVR members have added HoRNet MultiFreqs to 3 My KVR groups 5 times.
Not In Your MY KVR Groups
(or group limitation prevents versioning)
2 +2 I Own This
2 +2 Favorites
1 +1 I Want This

HoRNet MultiFreqs is a spectrum analyser that provides two different kind of visualisation of the audio spectrum for up to 28 tracks together.

The first visualisation type is called "analog" and is inspired to an analog hardware spectrum analyser that is still found on the master of many recording studios even today, the second one is called "digital" and it's our own take on the typical spectrum analyser based on the FFT (the standard math to transform an audio file into its spectrum components).

MultiFreqs GUI is completely resizable and it's crisp and smooth on every display thanks to its hardware accelerated drawing.

Up to 28 tracks can be shown together and you can select which one you want to display, on VST3 and AAX host the plugin is able to read the track name, but you can easily change it just clicking on the name of the instance.

The plugin offer different integration times and ranges for the levels shown by the spectrum analyser, it also provides peak and average display features. MultiFreqs can display both the "mid" (or sum) part of a stereo signal and the "side" (or difference) to help you isolate problematic frequencies.

To find out problems between tracks even faster MultiFreqs also has a "conflict" button that shows only the part of the spectrum in common between all the enabled tracks.

Using a multi track spectrum analyser like HoRNet MultiFreqs allows you to check against frequency collision in different track (like the classic snare and kick combo or kick and bass) and help you get a more separated sounding mix and when the GUI is closed it uses almost no CPU so you can keep an instance of MultiFreqs in every track of your mix and open it when you need it.