InstantSampler by Muxer is a Virtual Effect Audio Plugin for macOS and Windows. It functions as a VST Plugin and an Audio Units Plugin. 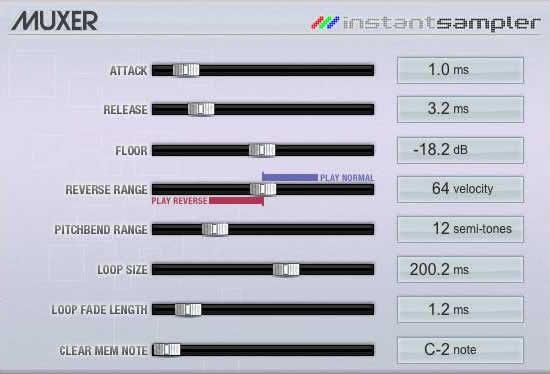 InstantSampler is a simple sampler that records audio from the audio input when a MIDI note is played for the first time. Any consecutive time you play the same note, it plays back the recorded audio with the possibility to vary or trigger:

This plugin is especially handy if you want to do some 'remixing' (like stuttering or scratch effects) on your mix without having to make a bounce-down of that mix first. You have explicit control over these effects, compared to other glitching "mess things up" plugins that often do things randomly.

?
You need to feed InstantSampler with Audio so it can actually sample something. Once it receives a note for the first time it records the input and the next times it receives this note it plays back what was recorded in the first place. So feed it for example a drum loop and quickly slice it onto some keys and play with the sounds you got. Or feed it some vocals to replace & mashup words or whatnot.

What i Love is that you can use the pitch-wheel while doing all this to pitch the sounds up and down. Instant-Sampler turns any audio source into an Instrument, at least thats how i use it. Often i use it to just add more chaos to drums that sound a bit boring and never-changing. So i improvise a bit and add the resulting drumsounds and leave the original sounds existent. Soundwise Instant-Sampler sounds perfect to me as all it does is reproducing sound and to pitch it up and down. I didn't really use the loop-modulation mode yet but i will soon now that i got reminded about that. The UI is very simple and self-explaining. Presets are not needed.
Hope you enjoy this great powerful small plugin as much I do.