My KVR
MIDI Processor Plugin by W. A. Production
$69
at waproduction.com
DetailsSwitch Section 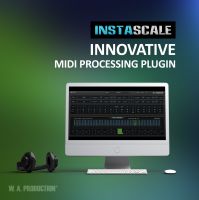 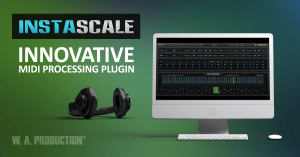 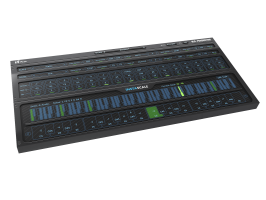 InstaScale by W. A. Production is a Virtual Effect Audio Plugin for macOS and Windows. It functions as a VST Plugin, an Audio Units Plugin, a VST 3 Plugin and an AAX Plugin.
Product
Version
1.1
System Requirements
Windows 7 and later (32/64-bit)
Product
Version
1.1
System Requirements
OS X 10.7. and later (32/64-bit)
Tags
Tags:MIDI ProcessorInstaScaleMIDI PluginMIDI ProcessingW A Production
Effect
Formats
W A Production - Instascale Preview
My KVR - Groups, Versions, & More
44 KVR members have added InstaScale to 8 My KVR groups 51 times.
Not In Your MY KVR Groups
(or group limitation prevents versioning)
36 +1 I Own This
6 0 Favorites
4 0 My Actual Studio
1 0 My Perfect Studio
1 0 I Want This
+3 in private groups

W. A. Production is rolling out another innovative tool to assist you in your song creation adventures. Play your instruments using the brilliant idea of relative notes, rather than the old static approach. Explore the world of scales and expand your creativity in a way that you never have before.

Instascale is a newly invented, scale oriented instrument with only 16 keys to play with. But wait, is that enough? Turns out it's more than enough. Unlike the standard keyboard instruments where each key can only play a single note, Instascale has a set of smart keys, each one capable of playing different notes. The new note will be based on the given scale, last note's position and the action of the key assigned to it.

Instascale is available as a MIDI processor plugin that can be used in any DAW that supports VST instrument plugins (with MIDI routing) or AU MIDI effect plugins, given you the freedom to play any instrument you choose without any limitations regarding the sound and hardware.

We are sure you will find Instascale fun to use whether it be as an educational tool to learn scales or expand your current knowledge, as an outlet for creativity, as a quick reference, or to be applied to your live set. Just like the creation of music, the possibilities within Instascale are endless and at your fingertips.

Instascale works as a VST instrument and AU MIDI effect plugin. It receives MIDI data from the controller and swaps it with the processed one. In VST mode the output can be routed to any other instrument in the host application using the available routing functions in that host. The AU version works as a MIDI effect only in hosts like Logic Pro x that supports the type.

There are 16 playing keys that will be used to play the target instrument. What these keys do and where they're placed on the controller can be customized.

They can have static offset values like 'Home' or a relative ones like '+2' or '-3'. Using this offset value and the previous note, the plug-in calculate the actual note the key plays. you can read more about the playing keys in the manual.

In addition to playing keys there are some control keys that can be used to change and control some of the parameters of the plugin like scale and octave directly from the MIDI controller.

The plugin might work on older versions too, but it's not guaranteed.

InstaScale can be used on any software that supports VST plugins with MIDI routing or AU MIDI effect type. But to make sure it's compatible with yours please try the demo version before you buy (only C Major scale is available in demo version).

The installation instruction will be included in the downloaded package and manual.

In My Cart!Liquid Music
MIDI Editor / Pattern Sequencer by WaveDNA$0.00