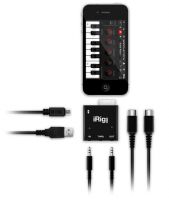 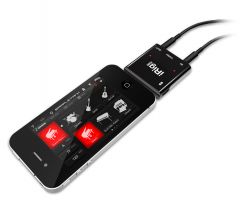 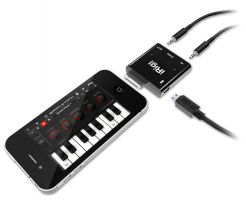 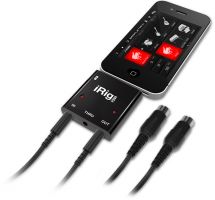 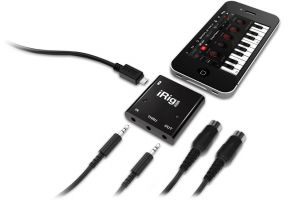 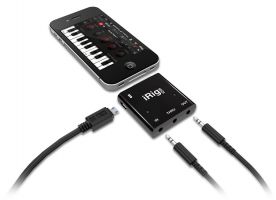 Interfaces
Apple 30-Pin Dock Connector
I/O
MIDI In MIDI Out MIDI Thru
Driver
No Driver Required
My KVR - Groups, Versions, & More
18 KVR members have added iRig MIDI to 7 My KVR groups 23 times.
Not In Your MY KVR Groups
(or group limitation prevents versioning)
11 0 I Own This
6 0 Favorites
2 0 My Actual Studio
+4 in private groups

iRig MIDI is an ultra-compact standard Core MIDI interface for iOS that connects any MIDI compatible device, such as a keyboard, to the iPhone, iPod touch and iPad. Together with the included SampleTank app, iRig MIDI brings mobile power and flexibility to keyboardists, and producers.

iRig MIDI can connect any standard MIDI equipment such as keyboards, drum machines, drum pads, pedal boards and more to an iOS device to control the included SampleTank FREE and a world of Core MIDI compatible apps, such as GarageBand, available on the iTunes App Store. With iRig MIDI, you can also use iOS apps to control external equipment such as sound modules, digital audio workstations or even lighting systems right from the mobile device.

iRig MIDI sports 3 MIDI ports – IN, OUT and THRU – so you can connect multiple MIDI devices without the need of additional gear using the two included standard MIDI connector cables. Two LEDs display the MIDI activity on the IN and OUT ports.

iRig MIDI is powered directly from the mobile device, but it also exclusively provides a micro USB port with included cable that connects to any standard USB power supply source so that the iOS device can stay fully powered during long playing sessions.

iRig MIDI is not only for keyboard players and producers using iOS devices for instruments, synthesizers or mini-studios. Guitar and bass players can also use iRig MIDI with multi-effects apps (including AmpliTube) to connect MIDI pedal boards for preset switching or effects control. Singers can do the same for controlling their favorite vocal effects apps (like VocaLive). DJs can use it with drum pads and other types of MIDI devices to integrate iOS apps into their favorite live rigs.

SampleTank for iOS is the mobile version of IK's virtual sound workstation for the studio offering 4 instrument parts with effects and an expandable sound set made of over 400 acoustic, electric and electronic instruments plus over 900 rhythmic and melodic patterns that span every musical genre. Users of iRig MIDI will get a set of 48 exclusive SampleTank sounds for free by registering.

iRig MIDI Recorder is the free utility for recording and playing back MIDI sequences or any type of MIDI data to and from any MIDI-equipped musical instrument. MIDI recordings are organized by creation date and can also be exported via Wi-Fi, E-mail and iTunes File Sharing in Standard MIDI file format.

Compatible apps: There are now currently over a hundred apps that use the Apple Core MIDI standard on iOS and are compatible with iRig MIDI and they keep growing. For the latest list, click here.

I'm relatively novice at midi, however I got the irig MIDI in the hope to sync any apps on my ipad (iKaossilator, Launchpad, Launchkey etc) with my tracks running in ableton on my macbook. All I need is for the ipad to clock to what is happening in ableton.

I've used ableton with the outboard novation pad and synced/clock a second macbook with ableton with no issues. I can see the red light flashing for the MIDI data in/out on the irig midi, but no timing.

FYI using a 002 for the MIDI interface.

Any ideas appreciated. thanks.