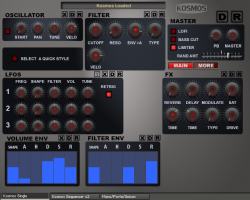 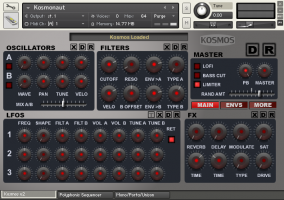 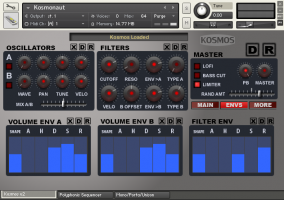 Kosmonaut is a Free Kontakt 4/5 library from the world of Kosmos created with instruments taken from Kosmos Classics and Kosmos Infekted. Features:

The Kosmos Sequencer is possibly one of the most complex Sequencers for Kontakt out there. It features 8 separate Instances which can be switched in realtime via MIDI notes. Each Instance contains a sequencer for Pitch, one for Velocity and 5 freely assignable sequencers which can be assigned to a large array of Destinations. Each Sequencer has its own step amount so that for example, pitch could be 8 steps, and another sequencer assigned to Cutoff could be 12. All 8 instances are unique and so can all have different destinations, Tempos and step lengths.

As well as triggering the Instances via MIDI, there is also a series of Tempo and Pitch Triggers. The tempo based triggers can pause the pitch steps, or pause the destinations, double step, half step, make the note length long or short or mute playback. This is a great jamming feature for adding interest and a modern sound to the sequences. The pitch triggers change the entire pitch output by +1 Octave, -1 Octave, or semitone increments.

There is a set of 12 Scale Remappers, one for each note in the Octave. Each one selects from a range of over 80 Scales and will force the playing sequence to play the selected Scale. For example you could set C to play Major, so that any sequences triggered by the C key would be forced to the major Scale. You could then make D minor Seventh. This helps get away from the standard transposed sequence sound and with some effort can make for an excellent set of building blocks to create a track. (The Kontakt 4 Presets do not have the Scale Remappers)

As all who have used Homegrown products in the past will know, there are always extensive randomization options, and the Kosmos Sequencer is no exception. It also takes advantage of Kontakt 5's ability to load and save presets, so that the entire sequencer can be loaded into a different preset, this can also be handy for creating template presets of your own with your preferred configuration.