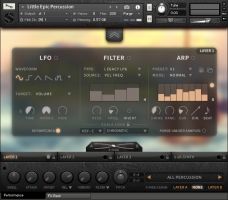 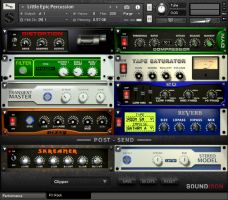 Little Epic Percussion is a splendid assortment of small orchestral and ethnic percussion instruments created to complement our existing collection of epic drums. We captured the majority of them in the same epic hall and using the same techniques as many of our other percussion libraries, so we think it will mesh well with most of them right out of the box. It also stands alone as a unique toolbox of under-appreciated but often called-for items, like the tambourine and finger cymbals. A new world of percussive possibilities with a fully loaded user interface packed full of powerful sound shaping controls and much more.

We not only went out of our way to capture these instruments as deeply as we could muster, but tried as much as possible to discover new ways of thinking about and playing them. You may notice some unorthodox articulations included with some of the instruments, as well as a few strange combinations and mutations that we hope will inspire you to play and create. Little Epic Percussion includes instruments such as tambourine, finger cymbals, concert triangle, ship's bell, wooden frogs, monkey drum, Native American rabbit drum, and a slew of mixed ensemble percussion featuring claves, kalimba, rattles, shakers, vibraslap, bell, and much more. The library also comes with 20 custom sound-designed factory presets to help inspire your next film score or video game soundtrack.

Listen to demos of Little Epic Percussion on Soundcloud