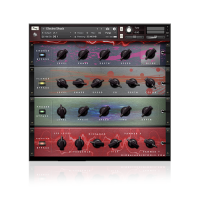 Global Audio Tools has teamed up with 4x grammy nominee and chief engineer Donato Arredondo to bring music makers across the globe a tool for the taking! Donato has earned grammy nominations from mixing and mastering for major artist such as Shelly Lares, Sunny Sauceda & Los Desperadoz. Today we'd like to present you guys with the all new "Malice Kontakt Library" which is a monster on it's own. Malice brings you guys sounds ranging from alienistic vocals to warp leads to huge choirs and even one shot real world recorded one shots. It also has a powerful user interface that is loaded with FX allowing you to turn 1 sound into multiple sounds and manipulate as you see fit. We are confident you guys will use this tool time and time again in your productions. Be sure to check out the sound demonstration video and download the demo to try it before you purchase your full copy.