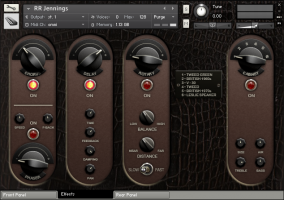 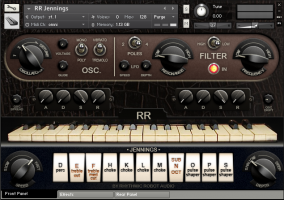 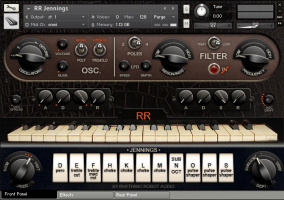 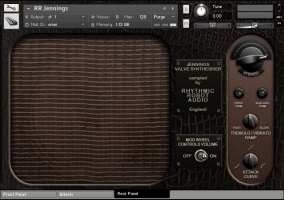 Jennings by Rhythmic Robot is Soundware (samples or presets that load into other products) for macOS and Windows.
Product
Version
1.0
System Requirements
Full version of Native Instruments KONTAKT v4.2.3 or later
Product
Version
1.0
Product
Version
1.0
Tags
Tags:SynthAmbientAnalogJenningsKontakt InstrumentRetroRetro Tube SynthesisersRhythmic RobotSynth (Analogue / Subtractive)Synth (Sample Based)SynthesiserSynthesizerTube-Driven
Soundware
For
Native Instruments Kontakt
Soundware
Formats
NKI
Important Note
Requires a FULL version of Native Instruments Kontakt version 4.2.3 or higher (all versions of Kontakt 5 supported). Kontakt Player is NOT recommended and will time out after 15 mins or so. PLEASE MAKE SURE YOU HAVE A FULL VERSION OF KONTAKT BEFORE BUYING, AS WE CAN'T GIVE REFUNDS FOR SOFTWARE BOUGHT IN ERROR!
Jennings - Tomorrow Never KnowsJennings - Telstar
My KVR - Groups, Versions, & More
8 KVR members have added Jennings to 5 My KVR groups 11 times.
Not In Your MY KVR Groups
(or group limitation prevents versioning)
5 0 Favorites
2 0 I Own This
2 0 I Want This
1 0 My Actual Studio
+1 in private groups

JENNINGS is a Kontakt software version of an early all-valve synthesiser designed in 1946. The original Jennings Univox was played by the Beatles during their early sets at the Cavern in Liverpool, and by the Tornadoes, who used it to create the signature synth sound of their 1962 synth-pop hit Telstar. It was designed by Tom Jennings who went on to form Vox amplifiers, and comprised a valve-based oscillator which could be run through a series of wave shapers, filters and EQs controlled by tab switches on its front panel, capable of creating over 2000 variations on the basic waveform. Vibrato added movement to the sound, while a knee lever controlling volume allowed the player to manage swells and tremolo wobbles in real time. The sound was output through a dedicated speaker cabinet into which the keyboard packed for transportation, making it a real alternative to other more cumbersome valve-based synthesisers like the Hammond Novachord for gigging bands. The Jennings Univox was similar to the Clavioline, another valve-based portable synth, but differed in its use of a sawtooth variant as its source waveform where the Clavioline used a square-wave variant. It is this valve-based sawtooth, rich in harmonic overtones and minor valve instabilities, that gave the Univox its uniquely warm analogue sound.

"It's a triumph of virtualisation... Jennings has been beautifully realised and sounds gorgeous – weird, warm and characterful" – Computer Music magazine

The Rhythmic Robot software version of Jennings starts with a meticulous recreation of the original instrument based around 24-bit, 20-second chromatic samples of a professionally restored Univox and using a combination of multiple sample sets and convolved IR maps to simulate the behaviour of all of the Univox's control tabs. Key click samples and a full sample set of the "Sub Octave" tab can be trimmed in level relative to the main wave forms, allowing more comprehensive balancing of the Univox's tone.

"Jennings sounds like nothing else we've encountered... it excels at exceptional string and organ sounds. Producers looking for unique valve synthesiser sounds from a long-gone era should love it... In a market full of generic-sounding soft synths, Jennings recreates a unique flavour from a bygone era" – Future Music magazine

For musicians wanting to explore the start of the synth era with complete authenticity, a "compliance mode" can be enabled to allow the user quickly and easily to dial in patches which conform exactly to the standards of the 1946 original. Patches designed in "compliance mode" sound indistinguishable from the original hardware Univox. However, for anyone wanting to go beyond the limitations of the original, JENNINGS extends the capabilities of the Univox considerably, adding polyphony, dual oscillators (drawing on different sample sets for a richer tone), a multi-mode resonant filter with LFO, precise control over envelopes (including attack curves) and a comprehensive effects section incorporating Chorus, Phaser, Echo, Rotary Speaker simulation and Amp Cab modelling. Accessing these effects and additional controls allows the user to create patches using a familiar subtractive synthesis model, but drawing on JENNINGS's front-panel tabs to create a base palette of over 2000 "oscillators". Any tab combination can be used as the starting point for a patch and then doubled up, detuned, filtered, effected and so forth. The result of this versatility is that JENNINGS is capable of creating both authentic, 1946-accurate tones in "compliance mode", and modern synthetic patches with a signature valve character, all from one clearly laid-out graphic UI.

JENNINGS is available now from www.rhythmicrobot.com priced at £35 / $55.

JENNINGS requires Kontakt version 4.2.3 or later (including Kontakt 5). Not compatible with Kontakt player.