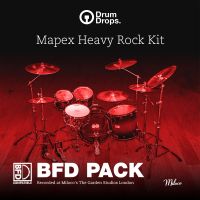 The Mapex Heavy Rock Kit is a monstrous sounding rock kit. The Mapex Saturn kit belongs to UK rock drummer Jason Bowld and is the kit he has used on all his recordings for the last five years for producers such as Andy Sneap, Romesh Dodangoda, Machine, Ulrich Wilde and Colin Richardson. This kit was also used to record the drum tracks album Heavy Rock Drops. What makes this kit special is it comes with three different Mapex snares and four different crash cymbals all carefully sampled in an incredible sounding live room.

The recording took place in the now closed Garden Studios in London. The studio had a legendary reputation being owned by John Foxx from Ultravox and Matt Johnson from The The. The live room was capable of providing a huge live sound and it is evident on these samples. At the centre of the Control Room was a Neve 8026 vintage console owned by Producer Craig Silvey and the microphones used ranged from vintage AKG C12's to B&K 4011's alongside the more traditional Sennheiser MD421's, AKG D12 and Shure SM57. With the vintage Neve and classic microphones we were soon able to get a great drum sound. All the microphones were recorded through either Neve 1084 or Neve 1076 mic pre's which were built into the console. With an external GML 8200 EQ on the kick microphones. The kit was them mixed in one of London's leading mix studios, The Red Room on an SSL-G Series console.

The "BFD pack" that has been been built as an expansion pack for FXpansions BFD3, BFD Eco and BFD2. The pack comes with 36 articulations which have been recorded up to 96 velocity steps and in total it contains 8076 samples. This kit also includes 20 groove palettes. These are split into 458 4-bar heavy rock loops played by Jason Bowld. Included in each version are six mix presets.

The BFD Pack is available now from the Drumdrops store costing £ 35.00. For a limited period customers can use the voucher code mapexbfd20 to receive 20% off. Head over to the Drumdrops site to find out more about this kit.