Mapex Heavy Rock Kit - Drum Replacement Pack by Drumdrops is Soundware (e.g. samples or presets that load into other products). 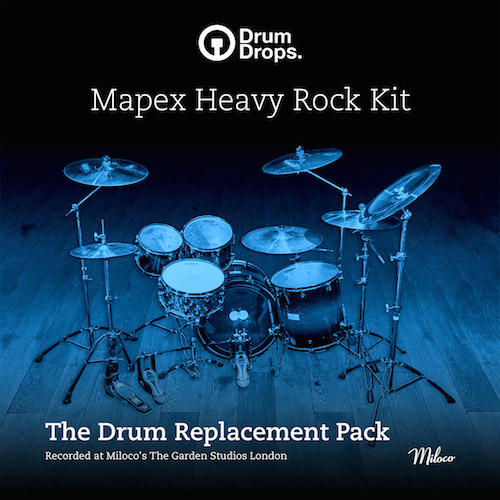 The Mapex Heavy Rock Kit - Drums Replacement Pack comes with templates for Slate Trigger V2, Drumagog 5 and DrumXchanger. If you use any of these and want a Mapex rock kit then this is the pack for you.

The Mapex Heavy Rock Kit is a monstrous sounding. The kit sampled belongs to UK rock drummer Jason Bowld and is the kit he has used on all his recordings for the last five years for producers such as Andy Sneap, Romesh Dodangoda, Machine, Ulrich Wilde and Colin Richardson. This kit was also used to record the drum tracks album Heavy Rock Drops. What makes this kit special is it comes with three different Mapex snares and four different crash cymbals all carefully sampled in an incredible sounding live room.

The "Drum Replacement Pack" is our sample replacement pack which includes templates for Slate Trigger V2, Drumagog V5 and DrumXchanger.

The Drumagog template uses the same samples and you can choose the balance between the close mic, overheads and room mics. This template uses up to 8 velocity levels with four round robins. We have included samples for the Kick, Snare, toms and hi-hat. If your version of Drumagog contains the Auto hi-hat tracking feature then the samples will follow the opening and closing of the hi-hat.

The DrumXchanger template contains stereo mixed samples (a combination of the overhead, room and close mics samples). This template contains eight velocity levels with no round robins. The snare also contains a rimshot sample that has its own adjustable trigger threshold.

The Drum Replacement Pack of the Mapex Heavy Rock Kit is available exclusively from the Drumdrops store costing $ 24.60. Head over here to find out more.