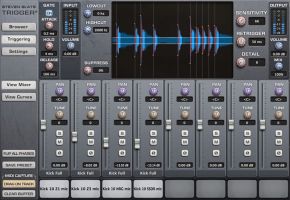 Trigger 2 Platinum by Steven Slate is a Virtual Effect Audio Plugin for macOS and Windows. It functions as a VST Plugin, an Audio Units Plugin and an AAX Plugin.
Product
Version
2.0
Product
Version
2.0
Tags
Tags:Drum ReplacerAudio to MIDISteven SlateTrigger 2 Platinum
Effect
Formats
Copy Protection
iLok Dongle (PACE iLok USB Smart Key)
My KVR - Groups, Versions, & More
74 KVR members have added Trigger 2 Platinum to 8 My KVR groups 80 times.
Not In Your MY KVR Groups
(or group limitation prevents versioning)
45 0 I Own This
20 0 Favorites
6 0 I Want This
5 0 My Actual Studio
1 0 My Perfect Studio
+3 in private groups

Trigger is an advanced drum replacement plug-in. At the heart of Trigger is a new triggering engine with Slate Digital's Advanced Algorithms. The engine also contains the AMG humanization algorithm. AMG is a physically modeled triggering algorithm that allows the triggered drums to play with an extremely realistic and natural response. Even ghost notes and complex drum fills can now be retriggered with ease, naturally.

Features
Trigger has a multi-layered triggering engine with 6 stereo channels. This means in one instance of the plug-in, you can trigger a close mic'd sample, a stereo overhead sample, and a stereo room mic sample, all at once from a single drum track. This allows the user to recreate the sound of natural drums with real multi-tracked samples. Each sample layer has parameters for customization such as velocity, tune, pan, dynamic control, sustain, and independent levels. Other features include positional sensing, automation for all parameters, MIDI in/out, visual hit detector, and 127 different articulations per sample layer. Aside from using multi-tracked samples, Trigger allows you to stack samples however you'd like to create custom drum sounds.

For The Mixer In All Of Us
Got a really heavy mix and need an aggressive and punchy drum sound that cuts like a knife? Simply enable Trigger's aggro mode, which forces it to use only the loudest sample velocities. Got a mix that you need easy soft drum sounds? Enable the soft mode, and instantly all the aggressive rimshot samples are muted. Trigger sample pools contain numerous presets that can cater towards any mix, just the way you like it.

Sample Accurate Triggering
When using Trigger, you will hear tight, sample accurate drum triggering without unwanted mis-triggers, flamming, or phasing. Kick samples line up tight with the original kick drums, snare drum transients align perfectly, and tom fills come out exactly like the original tracks. The Trigger algorithm uses advanced transient detection DSP modules and will produce accurate results from even complex snare rolls and fills, without hours of tweaking or having to manually move around hits.

Two Modes
Trigger comes with two modes, Live and Accurate. Live mode is geared for live on-stage triggering and has a no-latency engine. Accurate mode is the professional studio setting, which enables Trigger's advanced engine to replicate the original drum track with the most precise detail and natural velocity response.

Steven Slate Drums
Trigger comes with a library of the Steven Slate Drums drum samples. Mixers such as Chris Lord Alge, Mike Shipley, Dave Way, Jeff Juliano, Jay Baumgardner, Ben Grosse, David Kahn, and many more top names have relied on Steven Slate Drums to help enhance the drum sounds in their mixes for years. All the samples in Steven Slate Drums are recorded to 2 inch tape and processed with the finest in vintage and modern analog gear. Steven Slate Drums include three sample layers including stereo room mic samples from the famous NRG Recording in North Hollywood, California.

Steven Slate Drums "Deluxe"
Included in Trigger Platinum are drum samples from the new Steven Slate Drums "Deluxe" series. The Deluxe series of samples are recorded with an extreme attention to detail with multiple articulations, and include mono direct mics, stereo overheads, stereo room mics from NRG Recording, and stereo reverb samples from the Bricasti M7 digital reverb. With Slate Digital's Trigger, you can trigger all of these layers from one drum track, with one instance of the plug-in.