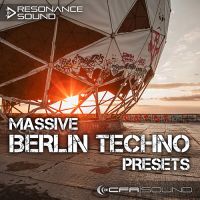 For many Berlin is the true capitol of techno, not just by its legendary clubs such as Tresor, Berghain and Watergate, also by being home for many different facets of techno itself – from ruff underground techno up to melodic and minimal techno. Wouldn't be the best way to appreciate this long term techno culture and influence with a supreme sound collection of 94 presets for a truly Berlin-based synthesizer from Native Instruments? Exactly – here you go with CFA-Sound's Massive Berlin Techno Presets.

Inspired by the sound of artists like Adam Bayer, Enrico Sangiuliano, Oliver Koletzki, Thomas Schuhmacher, Pig&Dan, Monika Kurse, ANNA, and others – all presets are designed to fit right away in your mix, and together with the full possibility of all 8 macro controllers engaged, you can change the sound of every preset massively in no time and let your creativity take over. No matter if you're more into underground techno, minimal techno, tech house or melodic techno – this soundset will give you the sounds you need for your own Berlin Techno journey.

In detail you will get:

Note: Drums, FX & Vocal sounds of the demo track are not included in this soundset. For the majority of the drums, fx and vocals in the demo track, Audio Boutique Techno Elements 2 and SOR Minimal Techno Revolution Vol.4 & Vol.5 were used.