Technotron SD422 by G-Sonique is Soundware (e.g. samples or presets that load into other products). 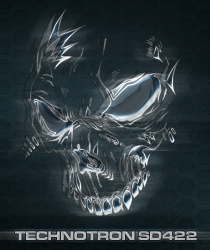 Minimal techno, industrial techno, schranz, electro, free tekno, Detroit techno, these styles seem to consist of simple to make rhythmical beats and other variations, but this is just not true. Everyone who has tried to produce minimal techno music at the top level must surely have met with the fundamental problem which is missing suitable samples that have the characteristics of a dirty minimalistic sound in their collections. Many of the samples from the available basic drum collections are not really useful, and there is a lack of minimal techno samples on the market which could be bought in the standard e-shops.

From our experiences we know that from 90% of techno sample packs, produced by competitors, only classic samples are usually useful like kicks, claps, hi-hats, but they are missing the most important of them: synthetic, dirty, minimal percussion, industrial sounds, robotic drums, scary hits, dusty clicks and scratches which sounds like a weak scratched radio signal from a far-away NASA space station attacked by evil aliens. The sound of drums that you never know where they are coming from. The creepy woods of the Amazon jungle or from a far, unknown mutant civilization, dark dirty noises and breath taking massive percussive f***ing beats. Simply put, the basic structure of each great techno track was always a big problem to achieve and even more difficult to produce. But...

The Technotron SD 422 is here. A collection of the samples which will help you to produce minimal techno at the TOP level. Now it is so easy to produce pro sounding minimal techno tracks, like building a house from Lego during your spooky childhood.

Of course, this sample pack is not just to be used for minimal techno, it is also useful in the most dark music styles like dark psytrance, psycore, dark ambient, dubstep, a dark drum and bass / neurofunk / darkstep / techstep, experimental, industrial, dark wave, tribal, minimal house, EBM, dark core...