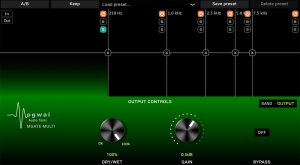 MGATE-MULTI by Mogwai Audio Tools is a Virtual Effect Audio Plugin for macOS and Windows. It functions as an Audio Units Plugin, a VST 3 Plugin and an AAX Plugin.
Product
Version
3.1.0
Product
Version
3.1.0
Tags
Tags:Multiband GateMGATE-MULTIMogwai Audio Tools
Effect
Formats
My KVR - Groups, Versions, & More
48 KVR members have added MGATE-MULTI to 9 My KVR groups 58 times.
Not In Your MY KVR Groups
(or group limitation prevents versioning)
27 0 Favorites
16 0 I Want This
8 0 I Own This
2 0 My Perfect Studio
1 0 My Actual Studio
+4 in private groups

A versatile multiband gate plugin with intuitive visual display controls, that offers up to six bands of separation. Furthermore, each band is provided with the following functionality:

Downloaded it yesterday and used it to clean up a snare drum. I wanted the transients above 8k, but not the ring.
Does exactly what it's supposed to. Great work. Looking forward to using it more.

Both downloads are for MAC.

Use this link. I just changed the extension at the end of the link to .zip and got the windows version.

liked the idea and UI, Both downloads are for mac, on KVR. So I went to Mogwai's site, opened an account, and got the windows zip. As soon as I extracted it my antivirus removed it. Pity, it looks good.

Use this link. I just changed the extension at the end of the link to .zip and got the windows version.

I can't find file in VST3 folder either in Cubase.

Is it really installing?