MIDI Control
by Secret Base Design 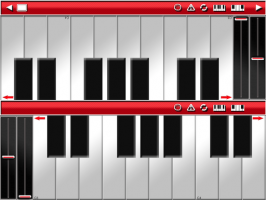 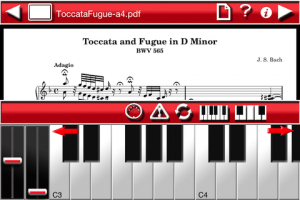 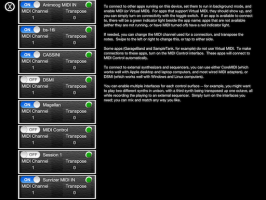 If you have more than one iOS synthesizer app, MIDI Control will change how you make music. By using Virtual MIDI, you can play more than one app at at time; play a bass line with one app using the lower keyboard, while you play a lead with a different app on the upper keyboard.

MIDI control allows you to mix and match, with the whole range of iOS music apps at once. Play Animoog with Magellan, Sunrizer with BS-16i, or Cassini, Arctic Keys, and Thumbjam, all at once. You can even take advantage of the synths and samples from GarageBand and SampleTank.

The keyboards also rotate around, allowing two people to play using one device.

In addition to the iOS synths, you can also connect to external equipment using CoreMIDI or DSMI.

For musicians who use sheet music, the app allows you to import PDF files. Keep track of music, transcriptions, song lyrics and set lists, right under your finger tips while you play.

This version has been updated to handle multiple Virtual MIDI connections, Retina display on the iPad and iPhone 5, and can also display song lyrics, set lists, tablature, and transcriptions.

The keyboards feature pitch and modulation controls, while the initial touch position is mapped to velocity -- this makes it possible to play expressively. The interface is configurable, so that you can change between full screen and split screen displays, keyboards, drum pads, and sheet music. The keyboards can be rotated, allowing two people to play at the same time.

Movies you wish you had not watched all the way throughby vurt @ 21:41 in Off Topic Classics

Continue this sentence with song lyricsby vurt @ 21:38 in Off Topic Classics

Interesting facts about where you liveby vurt @ 21:37 in Off Topic Classics