Neo MasteringQ by Sound Magic is a Virtual Effect Audio Plugin. It functions as a VST Plugin. 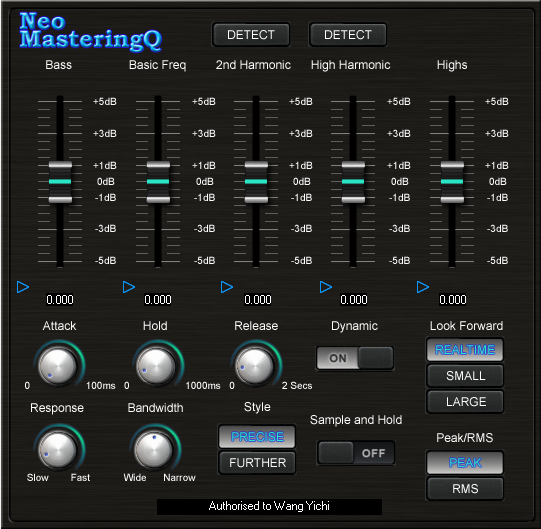 Mastering Engineers often think it would be perfect if an EQ curve could change as the RMS or peak level changes. With a lot of time and a super precise frequency control, this could be done within the traditional realm. However, with Neo MasteringQ, this process is a whole lot easier. Neo MasteringQ provides a 16 Stage, 32 User Preset Changing Curve for each slider. Users can achieve a different boost or cut amount as their dynamics change, giving them meticulous timbre control which will add great depth to the music.

Neo MasteringQ has precision control over dynamic detection parameters (Attack, Hold and Release Time) as dynamic processors. Its slider range is adjusted for lower distortion, which is critical for mastering.

Neo MasteringQ will do a lot of the work that a mastering engineer did in the past. Send an audio signal to Neo MasteringQ and it will analyze that input and find just the right frequencies for users. Users won't need to hunt for the right frequency by themselves anymore or worry about whether they can even find the correct one. After Neo MasteringQ finds that perfect frequency, users can adjust the bass, the basic frequency and the harmonic for it. This not only saves a lot of time, it can give its users amazing insight on how those with years of training zero in on exactly what needs fixing. And Neo MasteringQ takes the guesswork out of messing with the Bandwidth/Q settings.

Sound Magic has done the research, analyzing over 70 mastering engineer's methods on EQ (with a special focus on frequency furthering skill). This has lead to a special algorithm that Sound Magic has employed within Neo MasteringQ, making the arcane wizardry of professional engineers (and their years of education and experience!) available to the average recording enthusiast.

Another key feature that Neo MasteringQ provides is that users can analyze a piece of audio first, then hold the frequency characteristics of it and apply that setting to other audio tracks. In this way, users can clone a static EQ setting from one audio track to another easily.