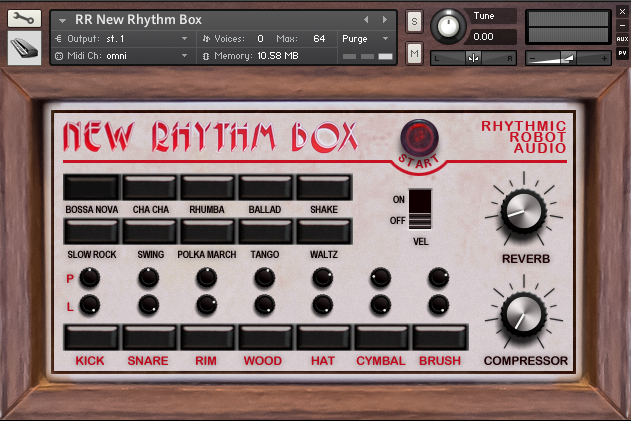 Plug-in, App & Soundware Format(s)
Operating System Availability
Audio Demos
New Rhythm Box Demo 2New Rhythm Box Demo 1
Miscellaneous Information
Important Note
Requires a FULL version of Native Instruments Kontakt version 4.2.3 or higher (all versions of Kontakt 5 supported). Kontakt Player is NOT recommended and will time out after 15 mins or so. PLEASE MAKE SURE YOU HAVE A FULL VERSION OF KONTAKT BEFORE BUYING, AS WE CAN'T GIVE REFUNDS FOR SOFTWARE BOUGHT IN ERROR!
Max. 6 items
Latest Version Changes [view all]
Any OS Version
1.0

Rhythmic Robot's New Rhythm Box is a recreation of the vintage analogue drum machine of the same name, originally made by the Italian company EKO. The New Rhythm Box was a transistor-based preset drum machine capable of producing ten preset rhythms, with no provision for anything beyond tempo and volume control. The Rhythmic Robot software version extends this usability considerably, breaking out the individual kit pieces so that the user can create their own rhythms, while still allowing the original presets to be played back, combined, and synced to host DAW tempo.

The tone of the New Rhythm Box is unmistakably analogue, and is ideally suited to mellower musical styles which favour a more rounded, softer tone than more modern beatboxes.

New Rhythm Box requires Kontakt version 4.2.3 or later, including all versions of Kontakt 5. (Kontakt Player is not supported.).